German research body will show its new cable-free system at ECOC 2015 in Valencia, later this month. 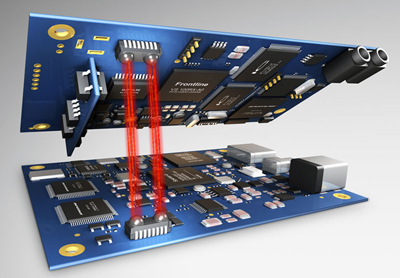 Scientists at the Fraunhofer Institute for Photonic Microsystems (IPMS) in Dresden, Germany, are planning to replace their existing wired fieldbus (communications) systems or HF connectors that are vulnerable to wear with their own newly-developed Li-Fi communication modules.

This emerging local communications protocol based on optical technology makes it possible to transmit data around a site in both half and full duplex modes at speeds of up to 12.5 Gbits per second over short distances.

The new Li-Fi interconnect technology will be showcased later this month at the European Conference on Optical Communication 2015 (ECOC), Europe's largest optical communications expo, which takes place in Valencia, Spain, from 28–30 September.

The optical transceiver replaces cable or plug connections and operates up to 10 times faster than is currently available over wireless solutions. Other advantages of li-fi include negligible bit error rates (<10-11), and low energy consumption. This transceiver arrangement is also suitable for industrial applications in which large amounts of data need to be transmitted rapidly and where conventional plug connections cannot meet requirements or provide the necessary level of reliability or safety.

IPMS Project Manager Frank Deicke commented, "With our know-how in the field of optical design, high-frequency electronics, packaging as well as high-frequency and optical measurement and test, we can respond flexibly to the needs of our customers. So, for example, we can optimize the size of existing prototypes or customize application-specific range and alignment."

The Fraunhofer IPMS-developed technology can already be tested and the institute currently offers evaluation kits for data rates of 1, 5 and 10 Gbps.