US adds another 1.4GW of PV power in June quarter

Solar PV responsible for 40% of new US electricity generating capacity brought online in the first half of this year. 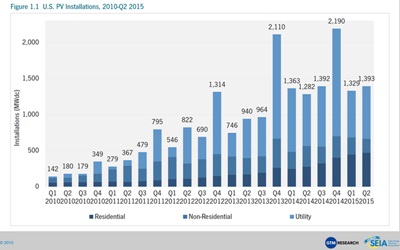 US installations of PV by quarter since Q1 2010

Installation of solar photovoltaic (PV) panels continues to gather momentum in the US, with another 1.4 GW of capacity added in the second quarter of 2015.

That’s according to analysts at Greentech Media (GTM) Research, whose latest Solar Market Insight report in collaboration with the Solar Energy Industries Association (SEIA) predicts a sharp ramp in installations in the rest of 2015 and through the end of 2016.

The pair reported earlier this year that cumulative US solar installations had passed the 20 GW milestone, with residential applications growing fastest to complement an already-strong pipeline of utility-scale projects.

Shayle Kann, one of the GTM Research analysts, noted: “The utility PV market continues to be the bedrock driver of new installation growth. And in the second half of this year through 2016, growth will reach new heights as a higher share of what comes online stems from projects procured purely based on centralized solar’s cost competitiveness.”

The GTM figures suggest that the US already has just over 11 GW of utility-scale PV in operation, with a further 16.7 GW contracted. On top of that, more than 28 GW worth of utility-scale solar has also been announced but is yet to be formally contracted.

GTM Research points out that with the federal solar Investment Tax Credit (ITC) scheduled to drop at the end of next year, utility-scale development is at an all-time high: more than 5 GW of capacity is already under construction.

Record year in the pipeline
Overall in 2015, the analyst firm now expects 7.7 GW of PV power to come online in the US – implying that 5 GW will be deployed in the second half of this year. That is slightly lower than previously expected, but if correct that annual total would still represent a new record, and a solid 24 percent increase on the 6.2 GW deployed in 2014.

Whereas PV deployments in the US have typically been concentrated in a handful of solar-friendly states – most notably California – the falling cost of the technology and new financing models such as that offered by the likes of Elon Musk-led SolarCity now looks to be making for more even distribution across the country.

The GTM Research figures suggest that ten different states each installed more than 10 MW of residential PV in the latest quarter. Only four states managed that in the same quarter of 2013.

It means 21 states are now home to more than 100 MW of solar PV, although the top five states still account for nearly three quarters of cumulative installations across the country.

With the future of the ITC very much up in the air and likely to be strongly influenced by whoever wins the 2016 US presidential race, predicting future deployments past the end of next year is a perilous business.

Unsurprisingly, SEIA President and CEO Rhone Resch is calling for the tax break to be retained. “The demand for solar energy is now higher than ever and this report spells out how crucial it is for America to maintain smart, effective, forward-looking public policies, like the ITC, beyond 2016,” he said.

But with PV responsible for fully 40 per cent of all new electricity generating capacity added in the US during the first half of 2015, the growing competitiveness of the technology – particularly for large, centralized projects – means that a cut of some kind to the ITC looks inevitable.