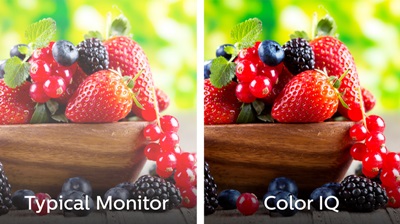 Flat-panel computer monitors capable of producing an unprecedented range of colors are going on sale in Europe next month, thanks to quantum dot technology that appears on the verge of making a major impact on the displays industry.

The European launch follows a global debut earlier this summer, when the 27-inch displays were launched in China. According to the Massachusetts Institute of Technology (MIT) spin-out QD Vision, upon whose “ColorIQ” technology the displays are based, that represented the world’s first quantum dot monitor.

This week sees the new monitors appear at a European trade show – Consumer Electronics Unlimited, otherwise known as IFA – for the first time, thanks to a collaboration between QD Vision, Philips, and the consumer electronics giant’s Taiwan-based licensing partner MMD.

MMD sells Philips-branded displays globally under an exclusive licensing deal. The firm’s marketing chief Stefan Sommer said of the new monitors: “Quantum dot technology is changing the way monitor users think about color, and the new 27-inch E Line monitor is the first on the market to showcase this new technology.”

He adds, in contrast to organic LED (OLED) displays, the quantum dots provide for a monitor with excellent color reproduction that can be sold at a “very aggressive” price point - cheap enough for anybody who uses a monitor.

Matt Mazzuchi, sales chief at QD Vision, claimed: “The superior color of our edge-lit quantum dots and our strong price-performance characteristics make them an ideal catalyst for positive disruption in the global monitor industry.”

MIT spin-out
Spun out of MIT by professors Vladimir Bulovic and Moungi Bawendi around a decade ago, QD Vision has since raised close to $100 million in venture finance – including some backing from In-Q-Tel, the investment wing of the US Central Intelligence Agency (CIA).

When illuminated by the blue LEDs that typically feature in LCD backlights, the quantum dots act like a phosphor, generating light across the rest of the visible spectrum. The specific wavelength of that re-emitted light depends on the precise size of the quantum dot nanocrystals, and can be carefully controlled.

According to the company, it means that its Color IQ optics emit “pure, finely-tuned colors”, enabling better color saturation and color rendering compared with standard LCD screens. “Most LCD TVs available today offer size and definition at the expense of color, using a smaller color gamut that only achieves 60-70 percent of the NTSC standard,” claims the firm. “With Color IQ optics, LCD TVs and other displays can achieve 100 percent of the standard.”

The recent emergence of quantum dots in monitors follows their debut in curved TVs earlier this summer. Launched at the Society for Information Display (SID) Display Week event held in San Jose, California, the first of those is a 55-inch “K7100” screen available from Hisense – China’s largest maker of TVs.

At the time Jianwei Cao, vice general manager at Hisense, said. “[The] application of quantum dot technology and [a] perfect curved screen has allowed users to be immersed in a cinematically phenomenal audio-visual experience. Moreover, this product also has an economic benefit for customers.”

$10BN market predicted
Some market analysts are predicting that because quantum dots offer a cheaper alternative to organic LEDs for producing such a rich palette of colors from flat screens, they will have a major impact on the displays market over the next decade.

For example Jennifer Colegrove, from Touch Display Research, reckons that the market for quantum dot components in displays and lighting applications will grow from around $2 billion in 2016 to more than $10 billion by 2025.

“Quantum dot technology could improve LCDs dramatically in terms of color gamut, color accuracy, and reducing power consumption,” Colegrove reported earlier this year, adding: “This is one of the biggest breakthrough technologies for LCD in several years. Cadmium-free quantum dot is entering the market in 2015.”

3M deal: a ‘game-changer’
That buoyant outlook was backed up earlier this month when another developer of quantum dots, this time California-based Nanosys, revealed that it and the materials giant 3M were collaborating with the Taiwan-headquartered displays company AU Optronics (AUO) – a key player in the market.

Nanosys has been working with 3M on quantum dot films since 2012, and the latest deal will pair 3M’s “quantum dot enhancement film” with AUO’s backlights for LCD TVs. That will put AUO in a position to supply large volumes of quantum dot display products to TV manufacturers, in what Nanosys CEO Jason Hartlove claims to be a “game changer” for the industry.

Erik Jostes, business director for 3M’s display materials and systems division, said: “The exciting thing is that the LCD industry is on the verge of a color revolution. Quantum dot materials enable displays to produce colors richer than any other technology, providing life-like images of a quality never seen before.”

Analyst Colegrove hailed this latest collaboration as “dramatic”, noting that AUO would be able to sell the technology to any TV brands. “This will accelerate quantum dot TV penetration,” she said.