Heliospectra sales up as US cannabis farms adopt LEDs 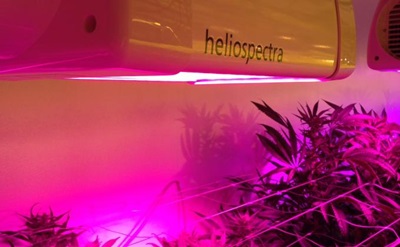 Heliospectra, a small Swedish company specializing in LED systems for growing plants indoors, says that its sales have doubled over the past year – with demand booming as US growers of cannabis become the latest customers to adopt the technology.

The Gothenburg-headquartered firm has just reported financial results for the first half of 2015. Revenues of just under SEK 5.4 million ($0.64 million) were up 113 per cent on the same period last year.

And although operating costs remain high in comparison, with the company posting a net loss of more than SEK 14 million for the six-month period, Heliospectra has recently attracted a private investment of $3 million off the back of sales to the expanding band of cannabis growers in the US.

Commenting on last month’s rights issue, CEO Stafan Hillberg said: “The private placement is done [sic] in order to cover production and purchasing necessary due to the increase in sales. Heliospectra has lately received several breakthrough orders in the US and we anticipate continued increase in sales of our products.”

That is a direct result of the changes to state laws in the US that has seen the sale and distribution of cannabis legalized in Alaska, Colorado, Oregon and Washington. In July, the company said it had received its largest order to date: a $0.7 million contract to provide cannabis growers in Las Vegas with LED lighting systems.

“Not only is this our largest deal to date, it is one of the largest indoor, horticultural LED installations in the world," Hillberg said.

Heliospectra, which is exhibiting at this week’s Native American Marijuana and Hemp Conference & Expo in San Diego, California, sells a series of systems - each featuring more than a hundred LEDs. They are said to give growers control over the intensity and wavelength of light emitted, making it possible to create a spectrum optimized to the needs of different plant species.

Cannabis drives growth
Like all LED lighting, the systems also consume far less electrical power than equivalent lamps based on conventional lighting technologies. Energy is a significant cost for indoor growers, with Heliospectra claiming that the plant sciences laboratory at Cambridge University in the UK is the institution's largest single consumer of electricity.

Since it was set up in 2006, Heliospectra’s customer base has typically comprised university and "agrotech" company laboratories, while similar technology was recently used on board the International Space Station to grow lettuce eaten by astronauts.

Commenting on the latest half-yearly results, Hillberg said that one of the firm’s most prominent customers was Germany’s DLR space agency, with whom it is collaborating on a European Union-funded project. MIT’s famed Media Lab and Kyoto University in Japan are among its other high-profile partners.

But the demand for cannabis growth in the US – for both medical and recreational purposes – looks like it could be one to stimulate much more rapid sales growth than the firm has posted so far.

According to Hillberg, the company received its first order worth more than SEK 1 million from cannabis growers in Washington State in the first quarter of 2015.

Then in the second quarter, Heliospectra began co-operating with Dixie Brands and American Cannabis, said to be two of the largest brands involved in medical cannabis growth. Hillberg believes that the US market for medical applications of the drug will exceed $10 billion by 2017, representing growth of some 700 per cent since 2013.

“Today, 23 states have approved cultivation for medical purposes and further states are expected to follow suit,” he wrote. “We can also see plans for approvals in other countries such as Germany, the UK and Australia, and expansions in Israel among others.”