Market set to boom at 75% CAGR, but then slip back; unit sales to continue growing says ElectroniCast. 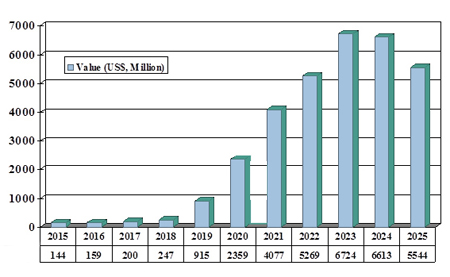 Sales of OLEDs for general lighting will boom over the next decade.

Despite the ultimate drop-off in cash value, 10 years hence, sales volumes by quantity are forecast to continue to climb through 2025; however, as with many other LED forecasts of recent years, average unit selling prices are expected to drop sharply, which will eventually cause the overall decrease, ElectroniCast noted.

The analyst’s definition for lighting in this study includes general lighting, which is used to provide the main illumination of a given area. The lighting category also includes specialized lighting, such as directional, supplementary, and architectural lighting, as well as OLED panels/tiles used in vehicles. However, OLEDs used in signage, TVs, displays, and signals are not included in the market forecast data for this particular study.

Stephen Montgomery, Principal Analyst at ElectroniCast, commented, “The OLED lighting market will grow beyond the light-bulb mentality to serve a broad base of applications, which currently may not even be in the idea stage. Applications that have been mentioned by industry participants include OLEDs incorporated into windows or skylights, wall and ceiling panels, mirrors with lighting functions, flooring, stairs, and other almost endless possibilities.

“OLED lighting is environmentally friendly, mercury-free, and ideal as next-generation lighting. Because of their extreme thinness, lightness, low electric power consumption, and use as a surface light source, OLEDs enjoy a wide range of potential applications,” Montgomery added. 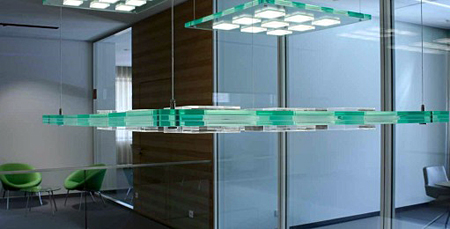 To demonstrate the illuminating effects of new OLED luminaires from Osram, lighting designer Dula installed a demonstrator in its showroom in Dortmund, Germany. The luminaires were created following a design concept by Dula.

Each luminaire consists of a glass panel, wherein nine acrylic blocks known as “OLED sandwiches” are inlaid, each with two square (120 x 120mm) Orbeos SDW-058 OLED panels. The luminaires constructed like this are attached to the ceiling, individually adjustable in height, and are said to create “impressive 3D effects”. The OLED panels can be individually controlled and dimmed wirelessly to give dynamic visual soft lighting effects.