UK-based developer of light-emitting semiconductors grown on silicon substrates to increase capacity by a factor of 30. 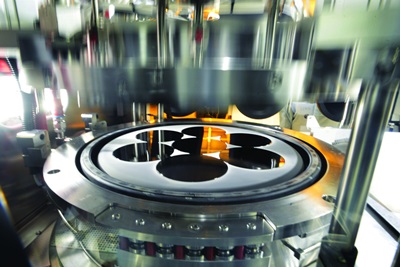 Plessey Semiconductors, the UK company specializing in gallium nitride (GaN) LEDs produced on silicon wafers, is set to increase its manufacturing capacity dramatically thanks in part to a £6.7 million grant.

The money, awarded via the UK’s Regional Growth Fund and intended to stimulate economic activity across the country, was initially allocated earlier this year. Now confirmed, it is being spent on key equipment such as epitaxy reactors – the workhorse tools used to deposit the critical light-emitting semiconductor layers inside LED chips. Plessey says that six new reactor chambers will come on stream over the next couple of years.

Like many makers of GaN chips around the world, Plessey is optimistic about the rapidly growing market for efficient solid-state lighting. The key difference with the Plymouth, UK, firm’s approach is that its devices are produced on silicon – meaning that it can take advantage of manufacturing tools used in more conventional semiconductor production.

That ought to help further reduce the cost of high-performance LEDs, although Plessey is lining up against tough global competition, ranging from long-established, vertically integrated players like Osram and Cree, to emerging but heavily funded Chinese companies like Lattice Power.

Capacity glut
While sales of LED-based bulbs and other lighting products are booming, that global competition has also created a glut of LED chip manufacturing capacity – something that has recently forced Cree to consolidate its GaN production capacity in the US, where it is in the process of shutting one of its two fabrication facilities.

Citing reports highlighting the rise of LED-based street lamps as the global lighting industry continues its transformation to solid-state technology, Plessey believes that it will be able to succeed with its “MAGIC” formula for making chips and has previously outlined its plans to ramp capacity.*

The technology it is developing originated at the University of Cambridge. Crucially, it relies on what is said to be a superior barrier layer in the semiconductor structure – meaning that the full stack of layers is much thinner than rival approaches and that wafers full of the light-emitters can be produced more quickly.

Plessey’s finance director Chris Bailey said that the RGF funding would contribute to expansion plans at its Plymouth headquarters, bringing more well-paid technical jobs to the site, and providing the base for new lighting technologies and products to be manufactured in the UK.

“The project also aligns very well with national strategies, and it aims to increase and support manufacturing in the UK to make [the country] Europe's leading exporter of high-value goods and services,” he added.

Facility modifications
The addition of new reactors should see Plessey increase its annual manufacturing capacity by a factor of 30 to more than 3 billion square millimeters – equivalent to around 170,000 6-inch diameter wafer starts per year. “The facility modifications will take place during 2015, with additional manufacturing tools and supporting equipment coming on stream from 2015 through to 2017,” said Plessey.

Another developer of GaN-on-silicon LED structures, Germany-based Allos Semiconductors (formerly Azzurro), recently said that its collaboration with Epistar had helped the giant Taiwanese LED epiwafer manufacturer catch up with other firms working on the multi-material approach.

Epistar had licenced the Allos approach earlier this year, and is now transferring the technology to its 6-inch and 8-inch wafer production lines. In a further sign of consolidation in the industry, Epistar and Cree last month signed a global cross-licensing agreement covering LED chip patents.

Not everybody is convinced that making LED structures on a silicon platform will have a major impact. Analysts at the consultancy firm Lux Research have previously predicted that only 10 per cent of the market for LED epiwafers will switch to GaN-on-silicon by 2020 – reckoning that the cost of overcoming the physical lattice mismatch between the two materials will prove too expensive for widespread adoption.

However, IHS analysts have a much more positive outlook, suggesting that as many as half of all GaN LEDs will be produced on silicon by the end of the decade.

* update (September 4): Plessey says that while there is overcapacity at the low end of the market, that is not the case at all levels. "Plessey’s investment is in capacity expansion in the fastest-growing markets in high-power and super-high-power LEDs, where there is insufficient supply," the firm said.

"The investment in GaN-on-silicon is a differentiated technology where integration of intelligence and optics is possible and available," it added. "The integration of discrete components [similar to] what is currently being dumped into the market in plastic leaded chip carrier packages is what the semiconductor industry has done over the past 40 years and continues to do so well.

"It is where LED lighting is headed. Plessey will be leading integration of solid-state lighting solutions with this investment."