OmniVision ticks down on China volatility 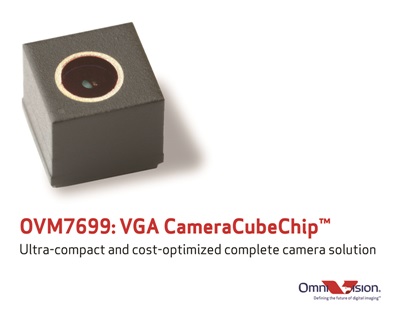 CMOS image sensor giant OmniVision Technologies has posted a 19 per cent year-on-year decline in revenues, while the firm’s management has taken a decidedly conservative stance in its near-term outlook amid the recent volatility on China’s stock markets.

CEO Shaw Hong told investors that quarterly sales of $330 million, generated by the shipment of 215 million image sensors, were in line with prior expectations, despite the demand from China being “fairly volatile”. Net income for the three months ending July 31 was also down sharply, to $18.2 million.

OmniVision’s sales are closely tied with the fluctuations of the mobile phone market, which still accounts for 65 per cent of company revenues despite long-standing efforts to diversify into automotive, machine vision and medical applications. And with an explosion of smart phone demand from China in recent years, OmniVision’s sales are also increasingly exposed to consumer spending patterns in the country.

Referring to that Chinese demand, Hong told an investor conference call: “It is still difficult for us to determine the seasonality pattern of our business, especially with our business mix shifting towards this part of the world over the last few quarters.”

The CEO added: “Nonetheless, we believe that the long-term outlook for this end-market, particularly for mid-tier to entry level smartphones remains very positive. Other imaging markets such as India are also increasing their demand for mobile phones. We will continue to invest in China and other emerging markets to realize their longer-term potential despite near term volatilities.”

However, Hong and his executive team set their expectations for a sequential drop in sales in the current quarter – despite it being the typically strong run up in advance of the Christmas holiday period – by issuing guidance of between $300 million and $330 million for the three months ending October 31.

More partnerships
Currently celebrating OmniVision’s 20th year in business, Hong and colleagues are striving to diversify towards industrial and medical markets and be less susceptible to the sharp and largely unpredictable swings of the consumer electronics sector.

One of its most recent efforts involves the development of a next-generation endoscope featuring an OV6946 sensor with partners Fujikura and Precision Optics Corporation. Hong told investors to expect more of these technology-led efforts in the future, saying:

“Last year, I talked about forming more technology partnerships as a way to speed up the introduction of innovative solutions to our target markets. In fiscal 2016, we are continuing that push.”

Referring to the Fujikura development work, he added: “Most recently, we [teamed] up with industry veterans to introduce precision camera solutions for the medical market.

“We have every intention to grow our medical business. With our partnerships, we are in a great position to further drive the adoption of seamless image sensors in this market.”

Acquisition still needs approvals
The stock market fluctuations over the summer do not appear to have had any impact on the planned buy-out of OmniVision led by Chinese private equity group Hua Capital Management.

Despite approval from both the OmniVision board and – around a month ago - the company’s shareholders, that acquisition is still subject to reviews by the Committee on Foreign Investment in the US and the relevant authorities in China.

“As of today, we have not obtained all the necessary approvals, nor have we met all the closing conditions. As such, there’s no assurance that the proposed acquisition by the consortium will close,” said Hong.

However, the CEO added that he does expect the deal to finally close in the second half of the company’s current fiscal year – meaning any time between November 2015 and April 2016.