The ULS-200 is 2G Robotics' mid-range underwater laser scanner. The system has a lightweight, compact design and low power and bandwidth requirements, enabling simple integration and operation. The scanner generates 3D point cloud models. From these models, highly accurate and precise measurements can be captured for detailed analysis of underwater structures and environments, such as are used in the oil industry.

HR Wallingford recently opened its Fast Flow Facility, one of the world's largest marine test facilities, with a unique, dual-channel flume for wave-current-sediment modelling. The company conducted trials with the ULS-200 at the facility, with technical support from Seatronics and 2G Robotics. HR Wallingford subsequently purchased a ULS-200 and has deployed it in marine renewables projects and scour research (see video, below). 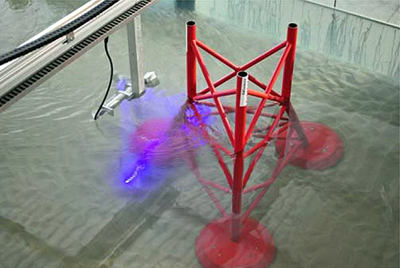 Prof. Richard Whitehouse, Technical Director, HR Wallingford, said, “We were impressed with the ULS-200's capabilities and results during our trials. The 3D visualisations generated by the ULS-200 are providing highly accurate models from which detailed analysis and research can be conducted. The ULS-200 is greatly assisting with our projects – including those in the marine renewables sector – delivering significant benefits in accuracy and efficiency.

Underwater laser scanning is a proven solution for subsea inspections, with certain advantages over the conventional sonar technologies; according to 2G Robotics, sonar does not deliver the detail necessary for understanding the state of subsea assets. Underwater laser scanning provides the precision and accuracy necessary for detecting and assessing damage, developing design and repair plans, and performing maintenance and installations.

The laser scanners can easily be deployed by AUV, ROV, or diver. The underwater laser scanning technology developed by 2G Robotics generates real-time 3D models of subsea assets and environments from which measurements can instantaneously and repeatably be captured. The high resolution of these models provides the detailed understanding needed to mitigate risks and avoid serious liability-related costs.

”When customers are confronted with more challenging requirements or deployment constraints, we are keen to work with them to develop innovative and optimal solutions. We have collaborated with customers, including ADUS DeepOcean and C&C Technologies, to develop deployment solutions tailored to their specific needs to best facilitate their projects. Collaborating with customers is intrinsic to 2G Robotics’ culture and we look forward to assisting you with your application.”