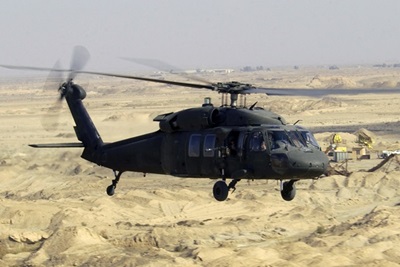 Defense giant Northrop Grumman, which has a long-standing relationship with Selex ES and owns an equity stake in Daylight, is heading up the consortium. The hybrid contract covers options for engineering and manufacturing development work, as well as low-rate initial production of what are known as common IRCMs (CIRCMs).

Based around QCL devices emitting in the mid-infrared region of the spectrum, CIRCMs are both more advanced and much more compact and lightweight than earlier protection systems.

IRCMs are designed to confuse heat-seeking missiles fired at aircraft by producing a thermal signature that mimics that of an engine – sending the incoming threat away from its intended target. Because they are much lighter, the QCL-based systems are much more suited to smaller planes and helicopters.

“The US Army's selection of Northrop Grumman and our industry partners for the CIRCM program is a critical next step toward protecting rotary-wing and medium fixed-wing aircraft against emerging infrared missile threats of today and tomorrow by augmenting existing self-protection systems with a directed laser jamming capability.”

He added: "We have outlined a path to superior aircraft protection through highly reliable performance and operation, a commitment to modular open systems architecture, and the ability to seamlessly integrate new technology. We are proud to have been selected to work with the Army to ensure our warfighters have the most advanced aircraft protection for decades to come.”

The contracted work is set to take place at Northrop’s Rolling Meadows facility in Illinois over the next two years.

More Viper lasers ordered
Meanwhile Northrop has also been contracted by the US Air Force, this time to provide precisely 106 new "Viper 2.1" lasers for the more conventional IRCM systems that are used to protect large aircraft.

Work under that $15.1 million deal will also take place in Rolling Meadows, and should be completed by the end of April 2017.

Formally introduced in November 2014, the Viper 2.1 is the latest generation of a photonics technology that made its debut in 2003 and which has already been used to protect more than 50 different types of military aircraft.

The Viper 2.1 incarnation offers higher power and, thanks in part to a simplified optical design, greater efficiency than its predecessors. Capable of multi-band operation, it is said to be the lightest laser system currently available for IRCM applications – although the QCL-based CIRCMs should assume that distinction once they are in full production.