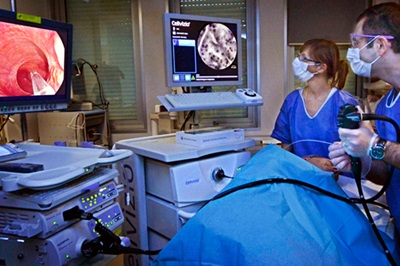 A team of neurosurgeons in Germany has used an optical biopsy system to identify cancerous brain and spinal tumors in real time, suggesting that the technology could be used for immediate diagnosis in future operations to improve surgical outcomes and patient recovery.

At the moment, surgeons and their patients sometimes have to wait for days before they receive the results of conventional biopsies from suspect tissue and the edges of malignant growths. The optical method could eliminate that wait and the accompanying stress.

Cleopatra Charalampaki and colleagues from the Cologne Medical Center in Germany have just published their results in the peer-reviewed journal Neurosurgery. In their open-access paper, the team wrote:

“In oncological surgery, confocal laser endomicroscopy (CLE) has the potential to intraoperatively detect and characterize tumor cells, providing immediate diagnosis without the need for frozen sections.”

They used the “Cellvizio” optical biopsy technology developed by the French company Mauna Kea Technology, combined with support from Siemens. Cellvizio has previously been used in gastroenterology applications such as identifying cancers of the esophagus and stomach.

150 biopsies
In this latest study, the 150 optical diagnoses made were cross-checked with the “gold standard” histopathology staining method. And although the CLE images showed cell features in an unconventional horizontal orientation, the surgeons reported “excellent” resemblance with histopathology results, “easy” discrimination of neoplastic tissues, and said that the technique was easily integrated into the operating workflow.

Charalampaki and her colleagues added: “We demonstrated in our work the revolutionary potential and perspectives that this new method offers in different regions of the neuronal axis where pathologies could be observed.” One of the key advantages is much higher magnification of tissues and cells possible with CLE:

“The surgical CLE prototype device we used in our project boasts an approximately 1000-fold magnification of the observed tissue structures during surgery,” wrote the team. “Widely used microscopy and standard endoscopy offer only a very slight increase in the visualization of structures, about 25-fold and 2-fold, respectively.”

In a statement published by Mauna Kea, Charalampaki said that surgeons can face significant difficulties when trying to assess tumor margins in brain tissue. “The ability to differentiate tissue in real time with this level of magnification and precision is a very significant advantage,” she said.

“These important new data provide strong validation of the mechanism of action of CLE with Cellvizio to support faster and more effective perioperative delineation between healthy and pathological tissue.”

Improving survival rates
In their paper, Charalampaki and colleagues did point out some limitations of the technique, largely relating to the fluorescent agents needed to improve contrast for in vivo diagnosis.

For example, fluorescent dyes like acriflavine and cresyl violet are not approved for use in a clinical neurosurgical setting and other contrast agents must be used. However, that drawback could be addressed in the future by using a different laser excitation wavelength, while the surgical team seemed overwhelmingly positive about the prospects of the optical approach.

“It is assumed that a subsequent routine use of CLE-assisted surgery will significantly improve both the diagnosis and the treatment of tumorous processes and can offer patients a significantly increased survival rate and quality of life,” they wrote in the discussion section of their paper. “This technique provides a qualitatively new contribution to the diagnosis, treatment, and follow-up of tumor diseases.”

Mauna Kea’s founder and CEO Sacha Loiseau said that the system could “completely transform” the diagnosis and treatment of brain and spinal tumors in the future – yielding faster diagnosis, more accurate assessments of tumor margins, and improved surgical resections.

“This is yet another example of a high-quality investigator initiated study bringing to light a novel use of Cellvizio with high clinical and market potential,” he said. “Importantly, these findings in the central nervous system also support the potential use of Cellvizio in the diagnosis and imaging of many other forms of cancer.”

• In a related development, BBC News reported that the Raman technique being trialed at London's Charing Cross Hospital had successfully identified a benign brain tumor during surgery to remove it.

The Raman technology used in the trial has been developed by the Canadian company Verisante Technology, as reported by optics.org in January. Neurosurgeon and chief investigator Babar Vaqas told us at the time:

"In brain surgery the true value of a non-destructive, rapid optical technique will be most apparent, as the gold standard is currently a frozen tissue section from which it takes up to an hour to get a result. I hope this will help improve the speed and accuracy of our brain tumor diagnostics, making our treatment pathway more efficient."