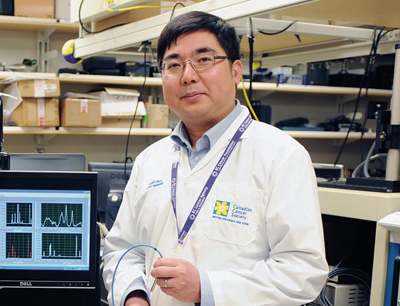 Canadian researchers have found a way to screen blood samples for molecular traces that indicate the presence of precancerous polyps in the colon, a key warning sign for colon cancer. A patient’s blood sample is mixed with silver nanoparticles and then analyzed using Raman spectroscopy, which the researchers say could lead to a cheaper and less invasive initial screening test for colon cancer that could complement colonoscopy.

The work was published this week in Biomedical Optics Express. Further clinical trials will be needed to demonstrate the safety and effectiveness of the blood test before it is routinely used.

"This is a screening technology you can use on anybody," said Professor Haishan Zeng, from the BC Cancer Agency, who led the study. Thanks in part to screening technologies like colonoscopy, colon cancer is often detected in its earliest stages. By snaking a camera through a patient's intestines, doctors can identify polyps and other abnormal growths that could eventually become cancerous then remove them before they do. Many lives are saved each year because of this sort of routine screening.

But the conventional procedure can also be expensive and unpleasant: patients must drink large quantities of laxatives the night before and undergo sedation or anesthesia during the exam itself. Current health guidelines say that adults should have a colonoscopy every ten years beginning at age 50 — and sooner or more frequently if other risk factors exist — but U.S. Centers for Disease Control and Prevention statistics say that only 65% of American adults actually follow these guidelines, which is why many researchers are searching for less invasive alternatives to the colonoscopy – to encourage more people to get tested.

In a step towards this goal, researchers from the BC Cancer Agency and the University of British Columbia have identified differences in the blood of people with precancerous polyps compared to people without such polyps. Their results could eventually lead to a cheaper and less invasive initial screening test for colon cancer.

The team collected blood plasma samples from three groups of people: 23 who had adenomatous (precancerous) polyps, 21 who had verified colon cancer, and 25 healthy volunteers. They mixed each plasma sample with silver nanoparticles and then analyzed the mixtures with surface-enhanced Raman spectroscopy (SERS). Raman spectroscopy uses a laser to excite the sample and measure shifts in the vibrational energy of its molecules, which can provide insight into the sample's molecular structure. In surface-enhanced Raman spectroscopy, nanoparticles are added to boost the signal.

In previous work, the team’s collaborators at Fujian Normal University showed a difference in the Raman spectra of the blood plasma of people with colon cancer compared to individuals who were cancer-free. This new study demonstrated that the test can also be used to identify people with precancerous polyps — a finding that makes it potentially more useful for a screening test, since it may be able to identify cancer risk before the disease actually develops.

A blood test that could detect precancerous polyps would be an improvement over other non-invasive colon cancer screening mechanisms currently available. For instance, the fecal occult blood test is an at-home kit that looks for evidence of microscopic traces of blood in stool samples, a potential sign of cancer. However, many early-stage colon cancers are asymptomatic and don't bleed, leaving them undetectable by this measure.

The initial results are promising, but the procedure is still in the research phase and must go through additional lab tests and clinical trials before actually being implemented. For instance, although the team identified significant spectral differences between the blood samples, they haven't yet determined the exact biomolecular sources for these differences. “We are planning new research to identify these responsible molecules,” said Zeng.

A blood test for colon cancer will never replace colonoscopy: once polyps are identified, a colonoscopy is still the best way to figure out where they're located so that they can be removed. However, a blood test could be used as a first line of defense to identify patients with warning signs of cancer; these high-risk patients could then be referred for a colonoscopy to learn more.