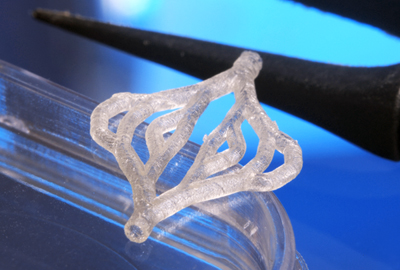 The EU research project ArtiVasc 3D is advancing the development of an artificial, three-layered perfused skin model “into uncharted territories”, says the multinational team in a statement released this week.

Led by the Fraunhofer Institute for Laser Technology (ILT), the group has developed a 3D printing process for the production of artificial blood vessels from innovative materials.

They have created the means for cultivating a full-thickness skin model to a much greater layer thickness than was previously possible. The ArtiVasc 3D researchers will present their findings at the project’s closing event at Fraunhofer ILT, on October 28-29, 2015, in Aachen, Germany.

Vascularization is one of the most important and highly challenging issues in the development of soft tissue. It is necessary to supply cells with nutrition within a multilayer tissue, for example in artificial skin. To date, it has only been possible to cultivate the upper layers of the skin – the epidermis and dermis – with a total thickness of up to 200 micrometers outside the human body. A complete skin system, however, also includes subcutaneous tissue having a thickness of several millimeters.

The project report states, "If one wishes to co-cultivate the hypodermis, blood vessels supplying this tissue are imperative since, for cell aggregates of about 200 microns thickness, the following applies: no life without blood. This is where the European research project ArtiVasc 3D starts; it has set itself the goal of enabling significantly more complex tissues to be cultivated in vitro by developing artificial blood vessels."

One of the biggest challenges the project faced was to how develop the optimal material for the production of artificial blood vessels. For them to be used in the human body, these vessels must have the correct mechanical properties and biocompatibility as well as full processability. Indeed, endothelial cells and pericytes must be able to colonize the artificial blood vessels.

The Fraunhofer scientists combined the freeform methods of inkjet printing and stereolithography. With these combined processes, the researchers were able to achieve a very fine resolution for the construction of branched, porous blood vessels with layer thicknesses of about 20µm. The researchers used mathematical simulations to develop data for the construction of branched structures, which would allow uniform blood supply.

The use of the acrylate-based synthetic polymer developed in the project permits the scientists to construct these optimized vessels with a pore diameter on the order of hundreds of microns. Compared to conventional methods, the ArtiVasc 3D process provides the general conditions to produce branched and biocompatible vessels in this size for the first time. 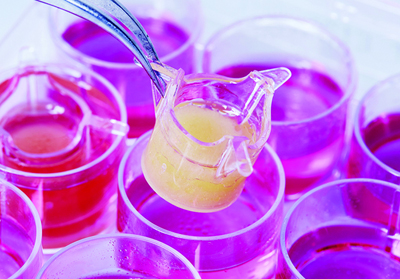 Macroscopic image of a fatty tissue equivalent - a seven-layered "skin".

Tissue from a bioreactor

The team says that the results of ArtiVasc 3D are shaping the future: “A toolbox has been developed that can respond flexibly to diverse materials, shapes and sizes. These results can be viewed as a precursor to a fully automated process chain for the production of artificial blood vessels, and which can also be integrated into existing lines.

"Another highlight of the project is the successful breeding of adipose tissue in a novel bioreactor. The combination of the fatty tissue with an existing skin model allowed the production of a full-thickness skin model which has a thickness of up to 12mm,” states the project’s concluding report.

The successful conquest of the third dimension need not be confined to the skin, however, the researchers believe. The ArtiVasc 3D project has also laid the foundations for three-dimensional tissue engineering. By using the principle of blood circulation with artificial blood vessels, medical engineers will be able to build larger structures such as whole organs in the future.

For full skin cultured in vitro, there are a variety of applications: quick assistance for large-area skin injuries such as burns or after tumor resection as well as a replacement model that would make animal testing in the pharmaceutical industry unnecessary.

The research group’s statement concludes, “Not only should the blood vessels as such be developed, but also the technology that is required to cultivate the entire skin system fully automatically, within the four-year project period. This extremely ambitious challenge could only be achieved in an interdisciplinary network.