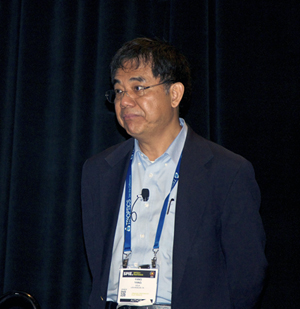 By combining the attributes from both organic and inorganic species, the light-harvesting hybrid perovskite (basic formula: CH3NH3PbI3) materials have “amazing physical properties”, according to plenary presenter Professor Yang Yang of UCLA, who delivered his technical presentation Tuesday in the form of a homage to what he calls the “dream material”.

“Its properties have already led to high performance solar cells after only a few years of research," he said. "Furthermore, besides single junction perovskite-based solar cells, research has also produced tandem devices that combine another low band gap material such as silicon to create even higher efficiency compounds."

Despite all of the research that has taken place across a wide range of groups, Professor Yang said he believes there are still several important things that need to be taken care of before the medium of organic-inorganic perovskite can be successfully commercialized for photovoltaic activity.

“These include: hysteresis of the photocurrent; the water soluble issue of perovskite compounds; long-term device stability; and the important issue of whether the lead can be replaced,” he told the full conference hall at San Diego Convention Center. ”The critical processes and features that we need to optimize for the creation of a successful perovskite solar cells include: film formation, interface engineering and the so-called tandem structures with silicon and other materials.”

He posed the question, why is perovskite such a promising solar cell medium, answering it with a slew of technical specifications (see below). ”The benefits of perovskite are its positive electron/hole transportation performance, low combination rate and high photoluminescence, long diffusion length and long carrier lifetime.”

Professor Yang then went on to describe the two principle structures of perovskite that his UCLA team is working on: the N-i-P “regular” structure and the P-i-N “inverted” structure. He detailed four specific areas of R&D interest, which he is investigating to refine the material’s stability and performance, which are:

He continued, “Perovskite solar cells are a promising technology. I believe it is a dream material, with its proper bandgap energy, high photoluminescence and carrier mobility and a long diffusion length. With a lot of research projects worldwide, perovskite device efficiency has been significantly improving in the past three years.

"However, we still need to improve the basic understanding of many issues such as the physical mechanisms, hysteresis, the current need for and usage of lead, compound water solubility and lifetime stability. We are still in the early stages of perovskite research and we need support from both government and industry, which is very critical to keep the perovskite momentum going.”

Questioned about the continuing need for toxic lead in the compounds, Yang said that the metal was currently still an important feature of perovskite chemistry but that “hopefully we can get rid of it in the long term. I think the lead problem can be solved.”