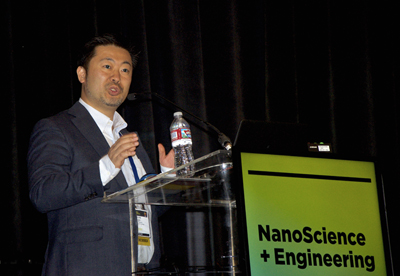 Yesterday’s plenary talk by Keisuke Goda, Professor of Physical Chemistry at the University of Tokyo (and an ImPACT Program Manager, Cabinet Office, Government of Japan), considered recent developments in and the applications and potential markets for new ultrafast and ultra slow imaging technologies.

He said, “Imaging is an effective tool in scientific research, manufacturing, and medical practice. However, despite its importance, it is not easy to observe dynamic events such as in photochemistry, phononics, fluidics, MEMS, and tribology that occur much faster or slower than the human time scale.”

The work of Goda and his team has led to the development and introduction of some radically different approaches to imaging, including ultrafast techniques called STEAM and STAMP as well as ultraslow imaging, each of which has transferable potential in medicine, semiconductor R&D and improving understanding of earthquakes, for example.

“STEAM, or Serial Time-Encoded Amplified Microscopy, is imaging for real-time observation of fast dynamic phenomena," he said, "which supports the world’s fastest camera in continuous recording mode. The STEAM technique comes from an adaptation of fiber-optic communications and it is nearly 100 times faster than conventional image sensor technology.”

Notable and unique applications of this technique are in STEAM flow cytometry. “In this process, we combine our STEAM camera with microfuidics to achieve flow cytometry to perform non-stop real-time image recording. We can detect extremely rare breast cancer cells in white blood cell samples or use it in the development of biofuels by identifying the presence of lipids in algal cells.”

A complementary high-speed imaging method is STAMP, or Sequentially Timed All-optical Mapping Photography. “This enables the world’s fastest camera in burst mode, which achieves a faster scanning rate than in continuous mode but with a more limited number of frames. STAMP’s frame rate is about five trillion frames per second, the shutter speed is about 300fs and the typical target image size is 500 x 500 pixels,” he said.

STAMP is effective for studying a diverse range of complex ultrafast phenomena. Its all-optical image separation circumvents mechanical and electronic restrictions that has limited conventional burst imaging methods, so it can achieve ultrafast, continuous, burst-type image recording at much faster fame rates.

“The first real image we made,” said Goda, “was of laser ablation processes, such as are used in micromachining in semiconductor fabrication. We have also been able to image phonons, which is today a hot research topic; imaging phonons is important for understanding the physics of semiconductor materials.” 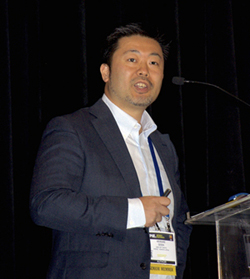 Ultraslow imaging
So how could new techniques in ultra-slow imaging be of interest to the scientific community? Goda explained “I am from Japan, which suffers from many earthquakes each year because unfortunately the country is located on top of four tectonic plates, which move over and against each other.”

“To be able to understand these underground processes, we have developed an optical technique to perform ultraslow imaging, which is effectively time-lapse nanoscopy using an electron microscope. This allows us to observe the tectonic plate surface features known as asperities being stretched under pressure, seeing when and how they break to be able to investigate the origin of earthquakes.”

Asked about the commercial potential of the various techniques, Goda said, “I think that STEAM has greater market potential than STAMP because it can be combined with mircofluidics, allowing us to diagnose cancer cells, immune cells and evaluate every single cell in a large sample so it cit could have a lot of clinical applications. And the ultraslow technique could have obvious benefits in understanding geological processes.”