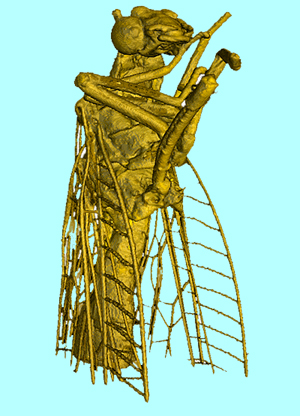 A new method to produce three-dimensional images of soft tissue structures in organisms using laser-generated X-rays and phase-contrast X-ray tomography has been developed by physicists from Ludwig-Maximilians-Universität, the Max Planck Institute of Quantum Optics and the TU München, all based in Munich, Germany.

The physicists have built a miniature X-ray source. In so doing, the researchers from the Laboratory of Attosecond Physics of the Max Planck Institute of Quantum Optics and the Technische Universität München (TUM) have captured three-dimensional images of ultrafine structures in the body of a living organism for the first time with the help of laser-generated X-rays.

Until now, such radiation could only be produced in expensive ring accelerators measuring several kilometers across. By contrast, the laser-driven system in combination with phase-contrast X-ray tomography only requires a university laboratory to view soft tissues. The new imaging method could make future medical applications more cost-effective and space-efficient than is possible with today’s technologies.

“This so-called betatron radiation is emitted in a collimated beam with excellent spatial coherence and remarkable spectral stability. Our results suggest that laser-based X-ray technology offers the potential for filling the large performance gap between synchrotron- and current X-ray tube-based sources.”

When the physicists Professors Stefan Karsch and Franz Pfeiffer illuminate a tiny fly with X-rays, the resulting image captures even the finest hairs on the wings of the insect. The experiment is a pioneering achievement. For the first time, scientists coupled their technique for generating X-rays from laser pulses with phase-contrast X-ray tomography to visualize tissues in organisms. The result is a three-dimensional view of the insect in unprecedented detail.

The X-rays required were generated by electrons that were accelerated to nearly the speed of light over a distance of approximately one centimeter by laser pulses lasting around 25fs. The laser pulses have a power of approximately 80TW. By way of comparison: an atomic power plant generates 1,500MW.

First, the laser pulse ploughs through a plasma consisting of positively charged atomic cores and their electrons like a ship through water, producing a wake of oscillating electrons. This electron wave creates a trailing wave-shaped electric field structure on which the electrons surf and by which they are accelerated in the process. The particles then start to vibrate, emitting X-rays.

Each light pulse generates an X-ray pulse. The X-rays generated have special properties: a wavelength of approximately 0.1nm, which corresponds to a duration of only about 5fs, and are spatially coherent, i.e. they appear to come from a point source.

For the first time, the researchers combined their laser-driven X-rays with a phase-contrast imaging method developed by a team headed by Prof. Franz Pfeiffer of the TUM. This laser-based imaging technique enables creation of three-dimensional images of objects. After each X-ray pulse, meaning after each frame, the specimen is rotated slightly. For example, about 1,500 individual images were taken of the fly, which were then assembled to form a 3D data set.

Due to the shortness of the X-ray pulses, this technique may be used in future to freeze ultrafast processes on the femtosecond time scale e.g. in molecules - as if they were illuminated by a femtosecond flashbulb.

The researchers say that their technology is “particularly interesting for medical applications”, as it can distinguish between differences in tissue density. Cancer tissue, for example, is less dense than healthy tissue. The method therefore opens up the prospect of detecting tumors that are less than 1mm in diameter in an early stage of growth before they spread through the body and exert their lethal effect. For this purpose, however, researchers must shorten the wavelength of the X-rays even further in order to penetrate thicker tissue layers.