US Department of Defense chooses Rochester-led consortium partnered by MIT and the University of Arizona.

by Ford Burkhart in Tucson
The US Department of Defense (DoD) has chosen a team based in New York State as the winner of a competition to build a $220 million foundry for high-tech optics and photonics research and manufacturing.

They are set to receive $110 million in federal funding via the DoD to create an Integrated Photonics Institute for Manufacturing Innovation (IP-IMI), with that amount likely to be more than matched by commercial and other partners involved in the scheme.

The New York team had said earlier that it would locate research, development, and manufacturing at photonics-related facilities as far away as California, without giving details. 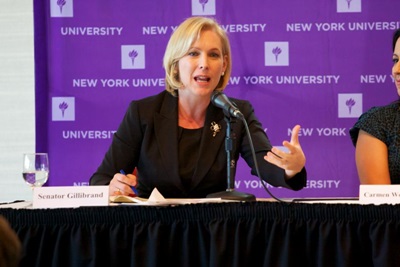 New York senator Kirsten Gillibrand said of the win: “This investment underscores Rochester and the surrounding region’s unique potential to be a national center for research and development - one that that will keep the country on the cutting-edge of new technology development and advanced manufacturing.”

NPI instigation
The photonics foundry idea was instigated by the US National Photonics Initiative (NPI), set up by key scientific member societies including optics.org publisher SPIE to represent and promote the sector in Washington, DC. Its steering committee chairman Alan Willner said of the New York win:

"Today is a great day for the US photonics industry, and we congratulate the New York consortium on this win. While other countries have heavily invested in advancing their optics and photonics industries, the US’ lead in this cutting-edge technology has dwindled. Establishing an IP-IMI in New York is a step in the right direction for our industry and will strengthen our country's position as the world leader in transitioning photonics research to commercial markets.”

He added: "The NPI and its supporting societies are committed to the long-term success of the IP-IMI. We are prepared to help the IP-IMI, and by association work with the DoD, by leveraging the platforms, programs and resources of our scientific societies.”

SPIE CEO Eugene Arthurs said that the competition had helped gain new recognition for the photonics industry’s research and development leaders. “We are gratified that policy makers and funding organizations have seen fit to support and enable further photonics advances with the establishment of the IP-IMI,” he said, citing as examples life-saving medical treatments and diagnostics, global communications, space exploration, 3D printing, sustainable energy, and lighting.

Innovation ‘ecosystem’
The IP-IMI foundry is designed to be an end-to-end innovation “ecosystem” including chip fabrication, standardized design tools, automated packaging, assembly and testing, and workforce development. The foundry is expected to demonstrate manufacturing of integrated photonic components and circuits.

Those components will incorporate multiple miniature optical structures to manipulate and control beams of light, analogous to the way integrated electronic circuits control electrons, in order to encode, transmit and decode information.

“A major goal for the IP-IMI will be to develop low-cost, high-volume, manufacturing methods to interface electronic integrated circuits with integrated photonic devices,” the NPI said.

The consortium’s proposal originated with the Research Foundation for the State University of New York (SUNY), with leadership from the University of Rochester and the SUNY Polytechnic Institute – both of which have a rich history in the development of photonics technologies.

Industrially relevant
The new IP-IMI is expected to bring large and small photonics-related businesses together with academic, federal and state agencies to accelerate innovation by investing in “industrially relevant” manufacturing technologies.

In its bid, the New York team claimed that more than 24,000 workers across 100 companies based in the Rochester area were currently manufacturing goods for the optics and photonics industry supply chain - including 50 small and medium-sized enterprises. New York state also serves as a major development hub for the semiconductor industry, with SUNY's College of Nanoscale Science and Engineering and IBM's two sites in Yorktown Heights and East Fishkill among the key sites.

In January New York senators Gillibrand and Charles Schumer publicly endorsed the IP-IMI bid, with Schumer saying: “Rochester is home to the world’s greatest concentration of companies, university programs, and expertise in the field of photonics, and this proposed partnership between the University of Rochester and SUNY Polytechnic Institute would further position Rochester as a global leader in this cutting-edge industry."

“Being selected as the country’s photonics hub would be a real game-changer for Rochester," he added. "It has the potential to galvanize the workforce, transform the local economy, and create jobs, jobs, jobs throughout the region. There is no better place to start building and strengthening a transformative domestic base for photonics innovation than in Rochester and Upstate New York.”

The foundry idea has emerged rapidly. As recently as October 2014, US president Barack Obama announced the competition to establish the DoD-led IP-IMI as part of a much wider investment designed to revitalize American manufacturing.

In his budget for fiscal year 2013, Obama proposed investing a total $1 billion to create a network of 15 manufacturing hubs called Institutes for Manufacturing Innovation (IMI). In his 2013 State of the Union Address, he urged Congress to pass legislation authorizing the full network of centers, and that legislation was subsequently approved.