New powerful sources are now taking on the roles and markets of older solid state lasers, such as cutting, welding and materials processing.

At a panel session on new high power industrial sources in Munich on June 24, optics.org took the temperature with Philips and Teradiode, while DirectPhotonics announced it has just won a further €3.3 million investment. 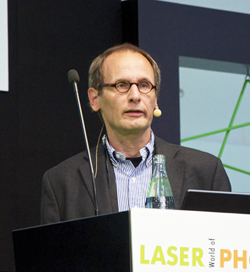 At Philips Photonics, Aachen, Germany, Dr Holger Moench has initiated and led several research programs on lasers as a powerful light source with a special focus on technologies that deliver laser power at the same cost as LEDs. This work has resulted in a new approach for visible lasers as well as in VCSEL-based systems for heating and sensing applications.

In his presentation, Dr Moench first described the development of high power VCSELs: “In Aachen, we are integrating our VCSELs into higher power systems. Individual VCSELs are typically just 10µm across and the power is limited but we can group them together such that a chip measuring just 2x2mm creates 10W. We group many chips together in our higher power units with 50 chips generating 400W from a current of about 8A.”

“Our VCSELs have been integrated into these professional woodworking machines with IMA. There is fast and uniform heating of plastic bonding of furniture panels, there is electronic control of desired heating zones and heating is transferred by direct VCSEL proximity with no further optics required. This is ideal because the system brightness is not so high that a plastic surface can burn before the material volume is heated up.”

Other applications of the Philips high-power VCSELs are in metallization line sintering in solar cell production, such as is already deployed in Rehm Thermal Systems, Blaubeuren-Seissen, Germany, and in infrared camera illumination for applications in security and machine vision.

Moench concluded, “At Philips we have shown that high-power VCSEL systems are a novel heating solution, which offers operational stability from a compact unit. Individual VCSEL emitters are addressable with precise control and they are already integrated into a range of digital photonic production systems. Our VCSELs are building blocks for even more tailored systems.” 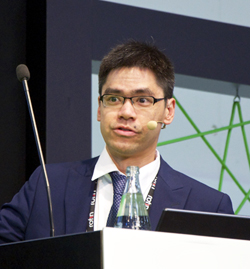 Multikilowatt class direct diode lasers for industrial metal cutting and welding was the theme of the presentation by Dr Robin Huang, who is VP at Teradiode, Wilmington, MA, USA.

The company develops high brightness direct diode laser technology, based on wavelength beam combining (WBC). Teradiode lasers provide the cutting and welding performance needed for industrial metal processing, and off the highest electrical efficiency available. WBC was invented and patented by MIT, now exclusively licensed to TeraDiode (which also has its own patents in WBC).

Dr Huang described the development of Teradiode’s 2kW and 4kW direct diode lasers designed for the cutting and welding of metals as well as he coiupler-free resonator, which is an alternative WBC technique. He also focused on the Terablade, a WBC system operating at 970nm, which offers a “scalable platform”.

”The Terablade has a blade structure which is scalable in power with more power bars up to 1300W. This can be ramped up to 20kW using banks of blades,” Dr Huang told the audience. “It is also field-swappable for easy and low-cost service.”

Berlin-based Direct Photonics was also presenting in this session on the theme of Modular High Brightness Direct Diode Lasers for Materials Processing and other Applications. The company simultaneously announced that it has just secured a new investment injection of up to €3.3 million – from existing shareholders and “a new significant industrial strategic partner” (unnamed).

“This investment is another important step in the development of the company. It aims to create a mature industrial organization, which ensures that product qualification, manufacturing processes and customer services are in line with market expectations. Beyond the financial investment, which reinforces the strong confidence of our investors in our business model, the strategic partnership gives DirectPhotonics access to resources that will significantly support the company’s organizational growth.”