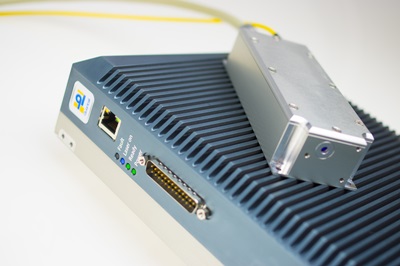 Paris-headquartered Quantel Laser says that its versatile “ELBA” fiber source is undergoing qualification for use in future gene sequencing equipment, a sector that is shaping up as a fast-growing market for photonics.

Launched at last week’s World of Photonics trade show in Munich, Germany, the new fiber laser platform builds upon years of expertise in the development of ultra-reliable laser diodes and fiber sources for telecommunications networks.

But the advantages of that technology are now becoming apparent in completely different fields, from laser cooling of atoms to microscopy, ophthalmology and cutting-edge biotechnology.

577nm line
One of the most notable aspects of ELBA is the sheer number of wavelengths that it can deliver across the visible and near-infrared range, thanks in part to a modular platform that combines two lasers to generate a sum-of-frequency output. That produces up to 3 W of single-mode power in the visible range and up to 10 W in the near-infrared.

The wavelengths available include a 577 nm line in the yellow part of the visible spectrum - one which is seen as particularly useful for photocoagulation procedures in ophthalmology, for example to treat diabetic retinopathy or age-related macular degeneration. That is because 577 nm matches precisely the peak absorption wavelength of oxyhemoglobin, and is also well absorbed by melanin* (see update below).

While Quantel already sells its much larger diode-pumped solid-state “Supra” laser into this market, DNA sequencing equipment could offer a major new opportunity for the far more compact ELBA design.

Alex Biasi, who manages the fiber laser product line for Quantel, said: “Instrument manufacturers, whether in the bio space or not, are looking for state-of-the-art lasers that are as robust and reliable as the instruments they build.

“They often need different wavelengths to target specific applications and they want maintenance-free devices that are simple to integrate into their systems.”

Faster DNA sequencing
That is where the high reliability of the new laser – based on expertise initially developed by Biasi and colleagues at the French fiber-optic component firm Highwave – comes to the fore. Quantel acquired Highwave’s development team back in 2006, after the latter had folded in the aftermath of the optical communications boom and bust.

Biasi told optics.org in Munich that high-throughput DNA sequencing equipment demanded single-mode lasers with good pointing stability, and that with higher powers it was possible to split the beam and provide faster sequencing. A more stable laser source makes for simpler system designs and, ultimately, gene sequencing at a lower price.

While there are different ways to read the base sequences that make up a genome, not all of them involving the fluorescence technique that relies on optical stimulation, Quantel says that the sector’s high-end tools do tend to rely on lasers. For example, Illumina’s “HiSeq” high-throughput sequencing tools use fluorescent labelling to support massively parallel sequencing.

According to Quantel, the ELBA laser is already in the process of being qualified for new and faster sequencing tools that are under development at an unspecified equipment maker.

In the lab
While photocoagulation and DNA sequencing are likely to represent the biggest commercial market opportunities for ELBA, there will be many other applications in the laboratory.

They include super-resolution microscopy, where it could replace diode-pumped solid-state lasers used in the stimulated emission-depletion (STED) technique pioneered by 2014 Nobel prize winner Stefan Hell, as well as particle imaging velocimetry (PIV) systems and laser cooling of atoms.

• Earlier this month, Quantel confirmed that it had received an order worth around €20 million from the French Atomic Energy Authority (CEA) for the giant Laser Mégajoule (LMJ) project near Bordeaux. Like the US National Ignition Facility, LMJ will seek to bring star power to Earth in the form of inertial confinement fusion.

After ten years in development and production, Quantel says that its pre-amplifier module has met all the requirements set, with CEA placing the first of two orders to equip each of the 22 laser chains in the giant system.

“The CEA may then place a second order with Quantel for around the same amount to complete the delivery of the 90 units that will be required to bring the 22 laser chains into service,” added the firm.

* Update (July 6th): in addition, the 577nm wavelength is not absorbed by xanthophyll pigment, which is contained within the retinal sub-layer. This results in a smaller and thinner heat affected area.