Applications of terahertz-based photonic systems are growing – whether in non-destructive industrial inspection of polymers or in security applications such as testing for hidden drugs or explosives. An optical metrology forum held yesterday at LASER 2015 reviewed a selection of recent developments, which are emerging from the laboratory and making waves in the marketplace. 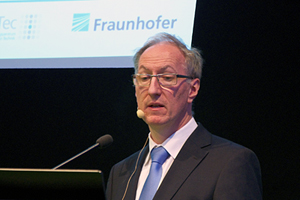 In a presentation entitled” Terahertz systems for industrial applications”, Dr Joachim Jonuscheit, of the Fraunhofer Institute for Physical Measurement Techniques (IPM), described the two principle sources of terahertz radiation; femtosecond lasers, based on either Ti:Sa of frequency-doubled fiber lasers; and CW diode lasers, with their associated benefits and disadvantages.

“For industrial systems you really need fiber-coupled systems,” he said. “Due to their relatively higher stability and flexibility compared with terahertz generators based on free space optics.”

Dr Jonuscheit He also acknowledged some examples of the growing range of commercially available and in-research terahertz sources including the GaAs-based TPS Spectra 3000 from Teraview and other recent developments from Advanced Photonix, Hübner, Toptica Photonics, Bakman Technologies, and from his own lab at the Fraunhofer IPM.

He concluded, “Terahertz sources are now available from a range of different suppliers applications. Those based on femtosecond lasers generally offer a broader spectrum and are faster, meaning more spectra per second. Whereas those based on CW laser diodes have the advantage of offering higher spectral resolution and are also cheaper.”