Laser 2015: efficiencies on the up as fiber laser competition grows

IPG's 6kW laser hits 48% efficiency as the firm introduces ‘trifocal’ beam concept to stay ahead of its challengers.

by Mike Hatcher in Munich
The growing competition among developers of kilowatt-scale fiber lasers was in evidence on the third day of the Laser World of Photonics trade show, with JDSU, Rofin-Sinar, Coherent and IPG Photonics all touting their latest technology advances.

They are all targeting a market for all kilowatt laser sources that is estimated by analysts at Strategies Unlimited to be worth around $1.6 billion this year. Fiber lasers already account for close to half the total, and that share is set to grow rapidly - sales are expected to rise at a rate of nearly 18 per cent over the next five years, further denting the share held by carbon dioxide lasers.

IPG Photonics accounts for by far the biggest chunk of those sales, and arrived in Munich with higher efficiency figures and a new multi-beam concept for improved brazing as it strives to stay ahead of an expanding list of competitors from the US, Europe and Asia.

IPG’s European sales manager Andreas Siewert told a trade show forum that the industry had to face up to the emerging competitive threat from China, and “run faster” by coming up with better performance and component quality while continuing to drive costs down.

For IPG over the past couple of years, that has included pushing wallplug efficiencies to record-breaking levels – making the lasers cheaper to run for customers. At Laser 2015, it revealed a 6 kW “ECO” series laser with an efficiency peaking at 48 per cent – a figure that does not include the power consumption of the laser’s chiller - following its earlier achievement of 50.1 per cent with a 4 kW laser.

The improvement has been rapid. At the Laser 2013 event just two years ago, the figure was only 35 per cent, and is partly due to the precise match between the output wavelength of IPG’s diodes and the absorption spectrum of the ytterbium in the active fiber that amplifies the laser power. 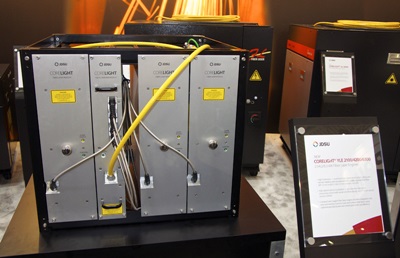 That is being touted as a new technique for metal brazing applications, where the two smaller beams act to “clean” the surface of the target piece, before the main beam performs the brazing step. Expected to prove useful in automotive production, where metal surfaces become contaminated by oil, Siewert said that the new approach gave a smoother surface finish to hot-dipped steel, with no re-working step needed.

Among the growing list of competitors with multi-kilowatt fiber lasers in Munich were JDSU, Rofin-Sinar and Coherent, each of whom was represented at the same panel forum.

First up was Erik Zucker, senior director of laser strategy at JDSU. The US firm, whose lasers and photonics division will soon be known as Lumentum, has recently launched a series of multi-kilowatt lasers based around its 2.1 kW “Corelight” module.

JDSU’s strategy exploits the state-of-the-art laser diode manufacturing expertise at its San Jose wafer production facility, which delivers high-brightness sources with the kind of reliability credentials built up through its long-standing experience in the telecommunications industry. Zucker said that the 630,000-hour diode lifetimes effectively translated to a zero failure rate over the time that a laser would be used.

With lasers delivering up to 6 kW now available from JDSU, from modules with a 35 per cent efficiency, plus its close relationship with machine tool partner Amada, the company looks like a force to be reckoned with. And while that efficiency figure does not yet match IPG’s, Zucker said that JDSU was targeting a level of 50 per cent for its next generation of kilowatt lasers. 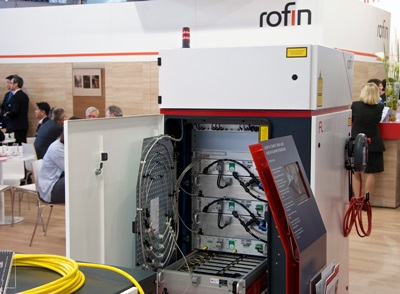 Rofin ups the ante
Meanwhile Rofin-Sinar has been upping the ante with the recent development of its third-generation fiber laser modules, and the appearance of an 8 kW laser on its giant Laser World of Photonics stand. Each of those fiber units now delivers a 2.4 kW output, with a wallplug efficiency of 43 per cent, reported Frank Becker from the firm’s Hamburg, Germany, headquarters for macro applications.

The improvement from its first-generation units, which produced 1.2 kW with a 35 per cent efficiency, is stark, and has enabled the firm to assemble 6 kW fiber lasers in a standard cabinet housing that could previously only deliver 3 kW.

Rofin’s new 8 kW laser has been put through its paces for welding applications, where it is showing around a 30 per cent improvement in speed versus the 6 kW source. Its 4 kW laser has also showed good performance for cutting copper metal, where Becker says that a small spot size and high power density are critical.

Becker also pointed out that most industrial laser applications are covered by the 8 kW output, meaning that the future appearance of a 16 kW laser was unlikely, but added that increasing the output of individual modules would be useful – for example to reduce the size of the assembled laser units. 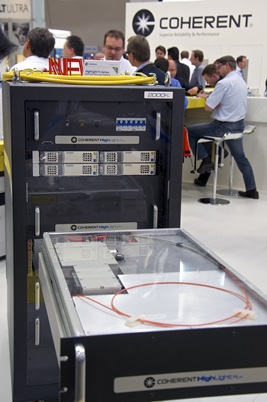 “Industry-first” warranty
Coherent did not unveil such a high-power fiber laser for the Munich event, but Bruno Acklin from the California-headquartered company said that its technology – based around a proprietary beam combiner - was scalable beyond that output level.

He emphasized the protection from back-reflection effects when processing metals like copper and bronze provided by the “Highlight” series, which is based around the company’s new warranty. The “back-reflection immunity guarantee [of] higher throughput”, dubbed “BRIGHT” in short, is claimed to be an industry first.

Acklin, who was previously CEO at diode laser specialist Lumics following stints at JDSU and Osram Opto Semiconductors, added that both turnkey and OEM versions of Coherent’s fiber laser modules – said to feature novel diode technology at the bar and stack level, and an improved current driver - were available.

With Trumpf subsidiary SPI Lasers, Jenoptik, nLight and others also showcasing multi-kilowatt lasers in Munich, not to mention the emergence of companies such as Raycus in China, the competition in this sub-sector now looks to be hotter than ever.

But that begs another key question: just how many competitors will the market for kilowatt-scale fiber lasers will be able to support, even at its current and rapid rate of growth?