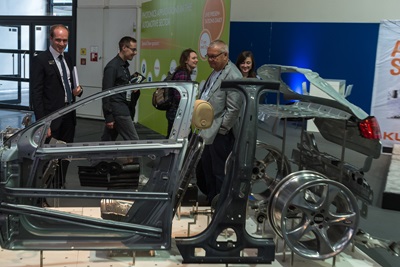 by Mike Hatcher in Munich
Audi and Trumpf took to the stage at a Laser World of Photonics applications forum during Wednesday’s trade show to detail how a range of laser-based manufacturing steps are transforming car production – including lightweight parts of Audi’s A8 model now being welded twice as fast.

Jan-Philipp Weberpals from the car maker’s Neckarsulm site near Stuttgart drew a crowd to Hall A3 with news that remote laser welding of aluminum hang-on parts using a 4 kW direct diode source from Laserline was able to complete nine seam welds in just 12 seconds – half the time taken by more conventional tactile laser welding.

Together with a beam converter from Heraeus to produce a smaller, 6 mm.mrad quality beam spot and a Precitec ScanTracker positioning system, Weberpal said that Audi modulated the laser to achieve a consistent welding depth.

As well as doubling the speed of the welding step, the remote laser is said to be 25 per cent more energy-efficient, and save on running costs enormously because – unlike with tactile welding - no filler material is required.

That translates to a “greener” story for both Audi and its customers, with increased use of aluminum long seen as a key way to reduce car weight, although the metal has provided plenty of tough challenges when it comes to laser welding.

Weberpal also hinted at a new optical sensing concept that the car maker is currently working on to ensure real-time quality control of manufacturing steps, although he declined to offer any further details.

Flange-free designs
One of the other advantages of the remote welding approach is that it allows Audi to incorporate much shorter flanges into its chassis designs, another way to reduce vehicle weight. However, laser giant Trumpf has gone one better than that in a research project involving the German Postal Service and RWTH Aachen University.

If you were among those wondering why there was a yellow Deutsche Post delivery van on the Trumpf stand in Munich, Ralf Kimmel from the Ditzingen-based laser company was able to explain all in his address to the special automotive-themed application panel. 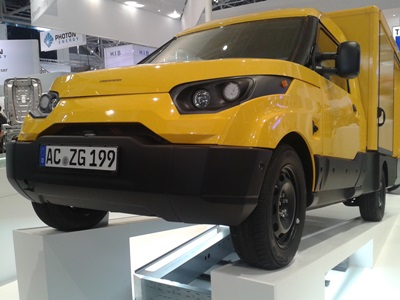 Remarkably, the underbody of the StreetScooter – a “carbon-free” electric vehicle for combined delivery of mail and parcels initially being deployed in and around the German city of Bonn – has no flanges at all, again translating to lower weight and running costs.

The design relies on another new remote laser welding process that was just one of five different sets of applications detailed by Kimmel, all of which promise to make vehicles leaner and therefore greener.

While that relies on a disk laser, a carbon dioxide source is used to perforate CFRP – a much longer wavelength being the key requirement. Kimmel repeatedly described that and the other innovations as “opening new horizons” for car makers, enabling new material combinations like joining plastic to metal to produce hybrid parts with tensile characteristics every bit as good as aluminum or steel joints.

Cut, weld, add, soften
Laser cutting is also critical for the adoption of hot-formed parts, which are lighter but much harder than conventional steel structures, and cannot be cut using traditional methods. Here, car makers can use Trumpf’s two-dimensional flat-sheet laser cutting machine to make tailored blanks, and then mark and weld them using different laser tools.

Another option is to use a laser to soften specific areas of the hardened steel, making them more ductile for subsequent production-line steps, while laser additive manufacturing is of course offering designers entirely new concepts and further weight reduction by minimizing material consumption.

“Additive processes are starting to enter the high-volume market,” Kimmel said, choosing to concentrate on laser metal fusion and laser metal deposition from the raft of different additive techniques under development.

As well as weight reduction, using additive methods mean that parts with material “gradients” – for example incorporating different steels, and nickel or cobalt alloys – can be produced from the bottom up, something that would be impossible with conventional steel production.