Faster diagnostic systems based on colorimetry, fluorescence and Raman techniques are in development for clinical use.

by Mike Hatcher in Munich
They don’t attract nearly the same level of attention as cancer, heart disease or AIDS, but sepsis and the more dangerous related condition of septic shock rank among the most deadly of illnesses.

For intensive care units (ICUs) in particular, sepsis is a huge and growing killer, aided and abetted by the ageing global population and the increasing presence of antibiotic-resistant bugs that are making a comeback long after the medical world thought it had consigned them to history.

Worldwide, the number of cases is estimated at 30 million per year, with approximately 160 people dying each day in Germany alone as a result. Despite that, the term “sepsis” is recognized by barely one in ten of the population. “Most people have never heard of it,” says Michael Bauer, an ICU specialist at the University Hospital Jena, adding that as much as a third of all ICU costs relate to the treatment of infectious diseases.

Caused by a combination of infection from bacteria, fungi, or parasites, and combined with the body’s own immune system response, sepsis is easy enough to identify in a simple petri dish – but the time that it takes to grow cultures means that for many patients their diagnosis comes too late. Sepsis can escalate into septic shock within hours, often leading to organ failure and death long before those cultures have been grown.

What clinicians want is a rapid, point-of-care diagnostic system for individual patients presenting at hospitals with the generic symptoms of an infection. Critically, they need to know exactly which pathogen, or bug, has caused the infection – so that the appropriate antibiotic drug can be administered, rather than a cocktail of several that has become the general standard of care. 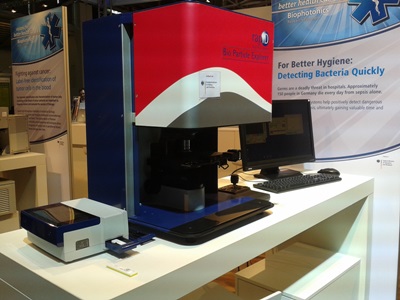 Unmet need
Bauer was speaking at a biophotonics application forum on the Laser 2015 trade show floor, in which it emerged that a variety of optics and photonics technologies are now under serious consideration to do exactly that.

Describing the “unmet medical need” of sepsis, he highlighted how the mortality rate of infections like bacterial meningitis have been cut dramatically, once the bug responsible has been identified. “If we have a better diagnosis, we can use antibiotics much more wisely,” he told attendees.

“There is a huge market [here] for innovative diagnostics,” he added. “It’s an attractive field for photonics techniques and there is a need for close partnerships between academia and industry.”

Ideally, he is looking for a point-of-care system that gives rapid information about both pathogens and the individual’s immune response – helping him and other clinicians to decide quickly which antibiotics a patient should receive, and even whether they need to remain inside the ICU or can be sent home.

The big challenge is that the requirements for the kind of diagnostic system needed to identify sepsis and individual pathogens read like a wish-list drawn up by Mr Spock for a new Star Trek Tricorder. The system must be fast, portable, sensitive, cheap, robust, and able to identify just about anything with 100 per cent reliability.

That is a tall order, but Raman spectroscopy ticks most of the boxes - aside from cost. Forum co-chair Jürgen Popp and his research team from the Leibniz Institute of Photonic Technology have developed Raman equipment capable of identifying pathogens from urine samples, correctly identifying the most abundant bacteria.

“It’s a powerful and reliable technique,” he said of the “RapID” tool (pictured), which can be seen in Hall B3 of the Munich show floor. The trouble is that it costs upwards of €50,000, and so would never be suitable for general, high-throughput use in the clinics where such kit is needed. Popp says that miniaturizing such technology with microfluidics so that it costs more like €3000 might be possible, but it represents a huge challenge.

The Raman approach can be adapted to instead screen for specific pathogens, perhaps one that is typically responsible for urinary tract infections, and to distinguish between antibiotic-resistant and regular bacteria. While Popp's group has shown that this is technically feasible, miniaturization still represents a major task.

Simple but sensitive
At the opposite end of the complexity scale is a prototype developed by German firm Qiagen that combines the familiar simplicity of a pregnancy testing kit with the optical techniques of colorimetry and fluorescence.

Described by Bernhard Gersternecker from the Lake Constance company at the Laser 2015 application forum, the automated system (also pictured) looks for specific biomarkers in pin-prick blood samples, and combines that with other key information such as a patient’s age to calculate their individual “sepsis score”, in other words the probability of them developing sepsis. The key optical component is what Gersternecker describes as a “simple but sensitive” detector at the heart of the system.

Suitably fast, portable, sensitive and simple for point-of-care use, the system is also expected to cost only around €2000 – much more suitable for clinical deployment. In early clinical trials, when used retrospectively on around 200 patients, it has performed well, and Gersternecker is optimistic that a much larger and more clinically relevant prospective clinical trial will soon get the go-ahead.

While the approach is not suitable for multiplexing, and does not therefore fall into the “Tricorder” category, the fast and apparently accurate responses it does generate could be used to assess patients as they present at hospitals, producing diagnostically useful results within an hour that help physicians to tailor treatment accordingly.