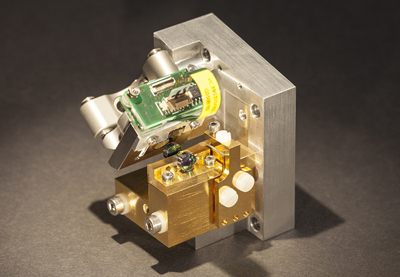 Critical chemical process analysis – such as is necessary in manufacture of pharmaceuticals, foodstuffs and certain industrial products – could be simplified with the help of a novel infrared laser developed by researchers at the Fraunhofer Institutes for Applied Solid State Physics (IAF) in Freiburg and for Photonic Microsystems (IPMS) in Dresden.

Dr. Ralf Ostendorf, project manager at Fraunhofer IAF, explained, “Our new quantum cascade lasers facilitate a new kind of spectroscopy. The process of chemical reactions – such as in the development of new pharmaceuticals – could soon be continuously monitored in real time, rather than having to analyze random samples, as is done in current monitoring processes.”

The system’s key operating principle is as follows: The laser sends infrared light into the reaction vessel; the reactants absorb a portion of the light; the rest being scattered back and analyzed by a detector; each substance absorbs the light at different specific wavelengths.

With this kind of spectrometer, says Ostendorf, “it will soon be possible to precisely determine the concentration of the reactant materials in the reaction vessel as well as the quantities already transformed into the end product – at any point of time during the reaction process.”

To achieve this, the laser has been designed to meet several requirements: the emitted laser light should consist of one specific wavelength only and, moreover, it has to be constantly adjustable over a wide spectral range.

Thus, the laser light initially has a short wavelength which can be gradually increased up to a designated value – before the analytical procedure recommences from the start. The detector then determines for each wavelength, how much light is scattered back by the respective sample. A further challenge to overcome is that the process of switching the laser’s emission wavelength must be as rapid as possible.

Up to now, the laser needed a few seconds to tune through every wavelength and to determine the actual state of the chemical reaction being analyzed. The researchers from Fraunhofer IPMS were now able to increase this speed by a factor of 1,000 by applying a micromechanical scanning mirror. Instead of one spectrum per second, they now succeed in recording 1,000 spectra per second.

The laser is barely larger than a matchbox. Thus, it is not only suitable for the reaction vessels used in the pharmaceutical and chemical industry, it also facilitates other applications. The researchers say that potential future applications of this QCL system could be in a hand-held device that would allow police or customs officers to inspect suspicious substances both quickly and easily.

To determine whether they were dealing with illicit drugs or something innocent such as flour, the agents merely would have to direct the laser beam at the substance. The detector analyzes the recorded spectrum, an underlying software compares it to numerous stored comparison spectra – and in a matter of seconds, the officers would have clarity about the substance.

A laboratory demonstrator model of the quantum cascade laser has already been realized. The researchers from the two Fraunhofer Institutes aim at developing a prototype of the laser by the end of 2015. At next week’s Laser–World of Photonics in Munich (from June 22 – 25), the scientists will present the novel infrared laser and will demonstrate its potential for spectroscopy applications. (Hall A3, Booth 121 and Hall B3, Booth 341).