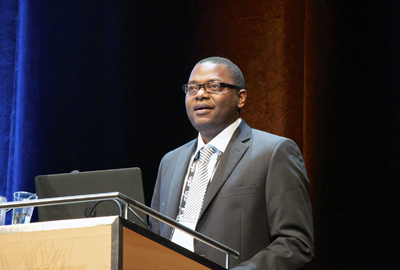 The World of Photonics Congress 2015, which accompanies the Laser expo, opened this morning at the ICM at Messe München with a collective celebration of the ongoing International Year of Light.

Among the key presenters’ endorsements of the multiple technical, economic and empowering qualities of photonics technologies, the potential of light to be a force for good in Africa, presented by Dr Yanne Chembo of CNRS and the African Physical Society, seemed to create the greatest interest among the conference attendees.

Dr Chembo gave an impassioned speech about both the need for further development and deployment of photonics-related technologies there as well as an African perspective on the IYOL.

He contrasted the challenges but also the opportunities for photonics technologies in the vast continent of Africa. “Some of the key numbers about Africa are as follows: A continent of 1.1 billion inhabitants but where 50% of the population lives below the poverty line; life expectancy is below 60 years and significant proportion of the population is struggling with basic issues.

“But on the other hand there are a lot of African indicators that are actually very positive. The African middle class numbers 300 million, who are becoming richer. Also, 70% of Africans are below 25 years of age – it’s a very young population. One quarter of all international investment is now made in Africa and the continent as a whole has a 7% GDP growth per year. It has tremendous potential.”

So what can be the impact of photonics in Africa? In brief, the main opportunities for photonics across Africa, outlined by Dr Chembo, are as follow: 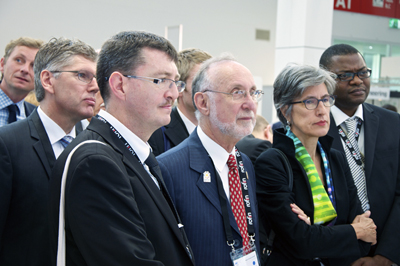 Also, during the opening ceremony, Messe München director Dr Reinhard Pfeiffer explained how the exhibition and conference parts of the expo have grown once more, “This year the Laser World of Photonics fair is offering new shows dedicated to the automobile industry and for 3D printing. We are hosting more than 1320 exhibiting companies, which is an increase of more than 100 over 2013. Exhibitors now come from 41 countries, and 60% of them are from outside of Germany. For the first time the Laser trade fair will cover a total area of 55,000 m2 in five halls.

“In 2015, there are new key areas of interest such as the Start-up Zone in hall B3 and there are new special industry focuses on automotive applications of photonics and 3D printing. The WOP congress is also growing: more than 2700 lectures will be given this week, so the congress has now assumed enormous proportions.”