International Year of Light steering committee chairman John Dudley is pleased and surprised with successes; but more still to do. 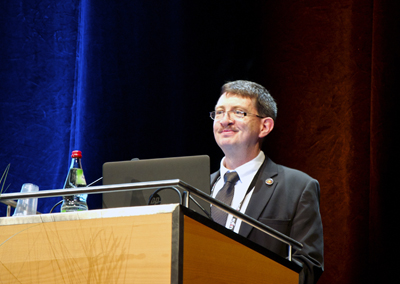 In an exclusive interview with optics.org, following the opening ceremony of the congress of Laser World of Photonics 2015, steering committee International Year of Light (IYL) chairman John Dudley described some of the major achievements of the UNESCO-led initiative at its half-way point.

”Over the past six months we have seen a great deal of interest in IYL from diverse groups around the world. It’s difficult to accurately report on the full impact of IYL, so far, because there are so many things happening independently. The number of new events that we are finding out about is typically running at 10 to 20 per day.

“When we do our own sampling via press agencies, we find that at least three or four times more activities are happening than the ones we are actually aware of. There are some unusual things happening. For example, the Girl Guides and the Scout Movement in Australia have declared IYL as a key theme, so we are already reaching tens of thousands of young people by those means alone, which UNESCO did not directly instigate.

“The French government has placed all of the resources of the IYL on its official teaching portal website, which, again, we did not directly influence. So that method is reaching hundreds of thousands more young people.

“IYL is working in a catalytic way, based on the profile of the United Nations. This realisation has made us focus more on the qualitative rather than just quantitative data but it’s clear that even qualitatively its effects are remarkable. We believe we have already made some significant achievements – and we are only half way through the year.”

“There are five or six major international light and photonics-related congresses planned for Africa alone, that we have actually heard of, and there are probably as many regional conferences again. One particular achievement is raising the issue at the global political level that there are two billion people around the world who still do not have reliable lighting.

“We spend billions trying to address the consequences caused by poverty but we spend very little on the things that could stop it altogether. When you consider that allowing kids to learn about the world for themselves – democratising education is so important and is not possible without light at home – then we have to solve the problem of providing access to reliable lighting for them.

“The idea of using IYL as a lever is what has led to the creation of Energy For All which involves five or six multi-national NGOs including the major lighting manufacturers Osram, Siemens and Philips. This group is lobbying to reduce what is being called light poverty so that, ideally, there will be light for everyone who needs it by 2030. That’s an amazing outcome and we have to make sure that it works.

“Most of the concerns of UNESCO are developmental or humanitarian in nature. Enabling access to photonics and lighting technologies is important on the one hand but there is also the important area of training and sharing knowledge.”

“We talk about taking science to places like Africa but there’s absolutely no point in trying to transfer the fruits of science and technology to these places unless there is also a human infrastructure present. The training aspect is very important.

“There’s already a UN learning program, which is called Active Learning in Optics and Photonics, which is running throughout the developing world we’re planning to triple the number of places on that. That’s a very concrete step so we’re delighted with this progress as well."

“IYL is working in a catalytic way leading to new educational start-ups and knowledge transfer; in fact it won’t really have an end point at 12 months because it’s working like a chain reaction. The IYL year itself is just a start and it gets us out of neutral. We have started making other people aware of the problem–solving potential of optics and photonics that we are already aware of. This is the broad achievement of the International Year of Light.”