European Photovoltaic Industry Association looks to future, 30 years after it was founded. 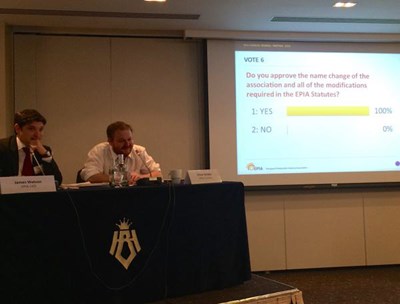 After 30 years representing its members’ interests as the European Photovoltaic Industry Association (EPIA), the trade organization and lobby group has voted to change its name to SolarPower Europe.

The rebrand follows several years of declining PV cell and module production among the continent’s former powerhouse producers, and a similar slowdown in deployments in key market Germany - despite the much lower cost of the technology compared with five years ago.

EPIA, which will officially launch under its new guise at next week’s InterSolar Europe trade show in Munich, said that members voted unanimously in favor of the change.

Its CEO James Watson said: “This is a true endorsement of a new era in the rapid evolution of solar power in Europe. Our organization has reached 30 years of age and the nature of our sector has fundamentally changed from where we were back then. The new brand reflects the growth and expansion of the scope of our organisation.”

While the center of gravity in PV manufacturing has shifted to China and Taiwan in recent years, sending former European giants such as Q-Cells into bankruptcy, the industry remains in a state of flux.

Major Chinese producer Yingli Solar was recently forced to issue a “going concern” warning to investors as a result of its hefty loans, while Hong Kong-listed Hanergy is the subject of an investigation following the recent crash of its stock price.

The disappearance of many European manufacturers – and EPIA members – means that the continent’s PV industry and premier association now look very different, and the EPIA switch reflects that change.

Credible source
Despite those profound changes, EPIA remains an important and highly credible source of PV market information in particular – and is due to publish its latest findings and outlook at the Munich event.

Oliver Schaefer, president of the rebranded entity, said while announcing the result of the vote in Brussels: “I am delighted that we have taken this positive step to give our association a modern and future oriented brand.”

He pointed out that the new name reflects the fact that the organization now represents members throughout the solar power value chain.

Watson added: “SolarPower Europe reflects three clear aspects of who we are today: Solar – we cover the whole solar value chain through our members; Power - electricity is our business; Europe - our geographical home.”

The association adds that its ultimate vision is to ensure that solar energy is the leading contributor to Europe’s energy system.

That isn’t quite the case yet, and with PV deployments of only 7 GW across the continent in 2014 the European market has shrunk dramatically in the past couple of years – primarily as a result of Germany’s less generous support for the technology as it has become cheaper.

However, as EPIA has previously pointed out, over the past decade the annual PV market has multiplied by a factor of 40, from 1 GW in 2004 to 40 GW last year. “While 2014 set a new record for the solar power industry, 2015 may see the global value of the sector reaching the landmark of €100 billion,” suggest the association’s analysts.

And although deployments across the rest of the world now dominate market reports, Europe remains an important location for the development and demonstration of new PV technologies, with organic PV still a high-profile topic at the research level.

• Analysts from SolarPower Europe will present their latest forecasts for the industry on June 9th at the InterSolar Europe event.