Photonics21 peers over the horizon 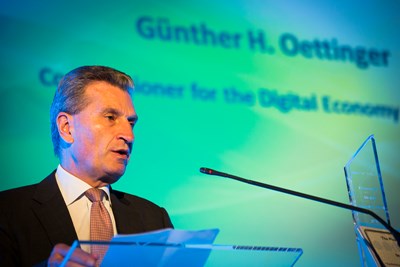 The Horizon2020-funded public-private partnership (PPP) in photonics might still be in its early stages, but the Photonics21 European industry association is already starting to look beyond the seven-year innovation program.

At the Photonics21 annual general meeting held in Brussels, Belgium, last week, president Michael Mertin said that the PPP was off to a good start, but that it was time to start thinking beyond Horizon2020 and about the strategic positioning of photonics past the end of the decade.

Speaking a day after the third board meeting of the PPP, Mertin said that more exchanges were needed to decide what to focus on once Horizon2020 finishes. He suggested that connections with other economic regions would be important, along with the EC’s focus on societal challenges.

Wolfgang Boch, head of the photonics and organic electronics unit at the European Commission, agreed, telling delegates: “You should be proud of what Photonics21 has already achieved, but don’t relax. The mindset now needs to be on next steps and going beyond Horizon2020. Research and innovation priorities should address opportunities for photonics created by new initiatives.”

In a talk entitled “Photonics Strategy in Europe in a Changing Landscape”, Boch said that 31 different photonics projects had been funded - out of 162 proposals - during the first set of calls, which covered the 2014-15 work program period. He highlighted the biophotonics subject area, noting that a particularly coherent set of projects including early detection of sepsis and cardiovascular disease were among those to receive support.

Budget grows despite 'Juncker Plan'
Priorities for the next call for proposals, due later this year, have also now been agreed in principle by the PPP. They include advanced biophotonics imaging for disease diagnosis, and the miniaturization of solid-state lighting systems, among others.

And despite the overall cut in Horizon2020 research funding implied by the new budget set by Jean-Claude Juncker’s new European Commission (EC) - the so-called "Juncker Plan" - Boch and Mertin said that EC spending on photonics technology innovation was set for an increase.

For the 2016-17 work program the PPP was originally supposed to have a budget of €187 million. That was reduced to €163 million after the Juncker Commision’s budgetary changes.

However, Mertin said that in reality the photonics PPP’s available funding for 2016-17 will actually increase to €203 million - although that is thanks to the partnership’s involvement in additional schemes, such as the “Factories of the Future” funding stream.

Governance and industrial participation
One aspect that Mertin said did require more attention was ensuring that this public funding was matched by the factor of four private investment that was promised by industry at the outset of the PPP.

“We need to work on governance to secure sufficient budget,” Mertin said. “And we need to significantly better understand the Juncker plan and its implications, as it’s not easy to understand how photonics can contribute to and gain from it.”

Overall, though, the Photonics21 president said that good progress was being made. Reminding attendees that the point of the PPP funding was to close the so-called “valley of death” that befalls so many technology innovations before they get to market, Mertin said that he was particularly encouraged by the higher level of industrial participation.

Figures for the initial round of PPP funding indicate that this has grown markedly, with just over half of the funded in 2014-15 projects featuring a commercial partner. “It’s exactly what we wanted to achieve,” Mertin told the Photonics21 AGM. “A strong connection between industry and research.” The Photonics21 president, who is also CEO at Jenoptik, added that more than a quarter of funded projects now featured an SME.

“Photonics21 is not for fundraising,” he added, saying that its agenda was to help drive a prosperous, wealthy and competitive Europe, earning the wealth that Europe wants to distribute as part of a social market economy. “We want [photonics] to be a cornerstone of this wealth,” said Mertin. “We have to turn innovations into production here, not in China.”

One example that he believes could have a huge impact is the use of sensors to improve the efficiency of logistics and transportation – something that would also have a huge impact on carbon dioxide emissions. “Think beyond H2020, and about what can be improved and the strategic positioning of photonics,” he urged those present in Brussels.