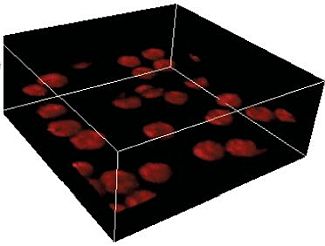 The technique exploits the long-established principle by which pulsed laser irradiation of an absorbing target produces a thermal expansion, followed by relaxation as the target cools down again. This cycle generates a pressure wave, effectively an acoustic signal traveling outwards from the target, that can be detected with ultrasound transducers.

Applying it to chromophores in biological systems has allowed PA microscopy (PAM) techniques to map hemoglobin and melanin in tissues, and detect breast tumors and melanoma at an early stage of development.

Given that almost any molecular species will demonstrate this behavior to some degree, PA techniques could be very versatile, and instrumental platforms employing them should be readily scalable. But there are also some snags, including the limited axial resolution available compared with the impressive lateral resolution that the technique can deliver.

A team at Texas A&M University has demonstrated a promising solution, through a novel hybrid imaging modality christened transient absorption ultrasonic microscopy (TAUM) - effectively fusing PAM with non-linear microscopy. The most recent findings were discussed at the CLEO conference in May 2015.

Non-linear advantages
"Lateral resolution in PAM is determined by focusing of the excitation, with a higher numerical aperture leading to higher resolution as in optical microscopy, potentially to sub-micron levels," commented Brian Applegate of Texas A&M. "But axial resolution is determined by the bandwidth of the ultrasound transducer. In practice, ten to 15 microns is the limit.

"This is a serious problem if you want to image with cellular or sub-cellular resolution on anything greater than one cell thickness. The axial resolution available from standard PAM is obviously not good enough, since the signal in the axial dimension would be integrated over several cell thicknesses."

To achieve a better result, the team incorporated a second laser source into its experimental platform, and exploited the non-linear effects induced by a pump/probe regime.

Introducing a pump pulse into the picture alters the population of molecular energy levels, and causes the PA signal induced by the probe pulse to become larger. It also allows a transient absorption signal - the differential between the signal with the pump pulse on and off - to be measured.

The transient absorption is a non-linear process, measurable using an amplitude modulation method to distinguish between the pump and probe excitation and then analyzing the signal from multiple laser pulses.

This turned out to remove transducer bandwidth from the picture, boosting the axial resolution substantially and making it proportional to the square of the focused intensity - similar to the case for confocal and multiphoton microscopy.

"To the best of our understanding, this effect is solely due to the non-linear optical effects," commented Applegate. "In our experiments the upper limit for axial resolution has been 1.5 microns, without deconvolving the image; roughly one order of magnitude better than the normal practical limit for PAM."

Lifetime measurements
Non-linear transient absorption can also reveal the excited-state lifetimes of molecules. These lifetimes have proven to be unique for different molecular species, and affected by the molecular environment - analogous to the fluorescence lifetime behavior of chromophores, even though some of the molecules examined by TAUM make poor candidates for study through fluorescence techniques.

"This principle can seem somewhat counterintuitive, since the physical process that leads to the photoacoustic signal occurs on the picosecond scale, while we have clearly demonstrated that we see lifetimes that can be much longer," said Applegate. "But this is because we are primarily measuring the repopulation rate of the ground state."

Experiments to image Rhodamine 6G, a fluorophore with a high fluorescence quantum yield, confirmed that the lifetime values obtained through TAUM were close to the fluorescence lifetime, and further work to investigate TAUM's analytical potential will now follow.

A particular goal is demonstrating the ability to image chromophores besides hemoglobin and melanin; cytochromes, which play key roles in various biochemical processes, are one such group. "If we can start imaging chromophores which have significant concentration at the organelle level, then the technique can have a significant impact," said Applegate.

Although a translational move into clinical applications is still some way off, the inherent simplicity of TAUM could ultimately smooth the path. Applegate noted that the platform is essentially a standard optical resolution PAM system, with an amplitude modulator and Fourier post processing algorithm incorporated; modifications to existing platforms should be relatively straightforward.

"I think most people do not consider entirely resonant processes like this one when thinking of multiphoton processes, concentrating instead on the ones that have been used with great success so far, such as multiphoton fluorescence," he said.

"Our multiphoton path towards high-resolution in PAM benefits from simplicity in both the system design and signal processing, and we are gaining an order of magnitude in resolution, using an optical chopper and commercial transducers and optics. The transducer we use has an axial resolution of around 50 microns for PAM, yet we get a resolution of 1.5 microns out of it."