Giant telescope in Chile installs the first of four yellow-orange sources that will sharpen up astronomical imagery. 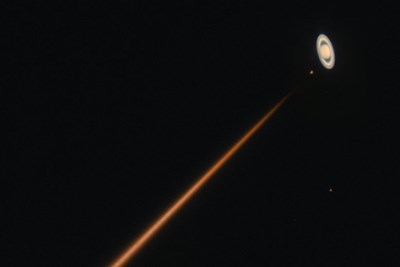 The new adaptive optics facility being built at the Very Large Telescope (VLT) in Chile passed a key milestone in the past few weeks, achieving "first light" with one of its four new laser guide star units.

The guide stars, generated by novel lasers developed by the Germany company Toptica Photonics, are a critical part of the adaptive optical system that will improve dramatically the quality of images captured by the European Southern Observatory’s (ESO) flagship telescope.

According to ESO, first light with the new laser took place April 29, when the 22W, 589 nm wavelength beam was pointed in the direction of a globular cluster of stars, and then towards the planet Saturn (see photo).

The laser is tuned to that specific wavelength so that it excites sodium atoms that are naturally present in the atmosphere at an altitude of around 100 kilometers. When the excited atoms relax, they emit light, creating an artificial “star”.

The VLT’s adaptive optics system, based on deformable mirrors, can then analyze the atmospheric turbulence distorting images of the guide star, and use that to correct images of objects in space.

“Several bright point-like stars needs to be at hand in order to correct for the effects of turbulence, and these need to be very close to the science target in the sky,” explains ESO.

Completion in 2016
The latest development represents the first of four laser guide stars set to be installed at the VLT over the coming months. When completed next year, the adaptive optics system will become fully functional, providing turbulence-corrected images for all its instruments.

“The concept is more far-reaching than just installing a deformable secondary mirror, since the telescope instruments have also been optimized to benefit from this upgrade,” ESO points out, adding that the imagery captured will progressively improve as each of the guide star lasers is switched on.

One of the key aspects of Toptica’s laser development for the project is that it will provide for much brighter guide stars than have previously been used. Developed under a €5.2 million project awarded in 2010, the lasers are based on a narrow-band, tunable infrared diode source with 50 mW output power at 1178 nm.

Together with a Raman fiber amplifier stage developed by project collaborator MPB Communications and a frequency-doubling stage the source then produces a powerful 589 nm beam, perfect for exciting sodium atoms.

Toptica has previously said that the laser overcomes problems that other designs have encountered at the high altitudes of the VLT (4200 meters), with the all-solid-state approach also ensuring that the equipment is compact.

Toptica president Wilhelm Kaenders said: “We are proud and happy to contribute to this major achievement of the 4LGSF ESO program, and to see the technology now broadly adopted also by other major telescopes.”

An example of that could be with the ESO's most ambitious project yet, the 39-meter diameter European Extremely Large Telescope (E-ELT), which will require six guide star units for its even larger adaptive system.