Removes the need for invasive procedures into artworks - for the first time.

A group of European researchers is developing a graphene-based scanner designed to investigate previouslt unknown aspects of works of art and other historic objects. The equipment will enable the inspection of hidden images on canvases and reveal what is hidden inside three-dimensional objects sealed centuries ago.

As well as showing sketches or previous paintings that have remained hidden beneath a particular art work, “the scanner will allow us to see preliminary drawings or identify overpaintings,” explained Javier Gutiérrez, researcher at Treelogic and coordinator of Insidde, the EU-funded Seventh Framework Programme involving eight organisations from five European countries.

The graphene-based scanner allows the way in which the paintbrush was applied to be observed, information which is opening up new fields of work for the scientists of Insidde. “The scanner may show details on how a painting was made that are of great art-historical value, because they tell us more about how the painter worked; these details are also extremely helpful for conservators when preparing for the restoration of paintings,” said Laurens van der Maaten from Delft University of Technology.

Although the scanner is still in its trial and calibration phase, the researchers have already managed to use it to identify some of the materials found in specific works of art. Marta Flórez from the Museum of Fine Arts of Asturias, Spain, commented, “we didn’t expect to get this type of information, but with the prototype we have been able to clearly distinguish between some pigments, which in some cases means we can avoid having to puncture the painting in order to find out what materials the artist used.”

The graphene scanner is seen “as a new instrument which in no way damages the materials being studied and which will extend the investigated spectral region, and make more accessible the use of THz imaging analysis in the world of art” commented Raffaella Fontana and Marco Barucci from CNR-INO, who participate in the development of the focusing system.

3D scanning is also a possibility with the graphene-based system.

With regard to whether this scanner could replace the other methods that exist for obtaining hidden images in works of art such as scanners using X-rays, infrared or ultraviolet radiation, the researchers at the University of Oviedo, in charge of the system, are quite clear. “Each frequency range has a different capability in terms of penetrating the different layers of a piece of work, so the information that is recovered with each technique is complementary to the others,” said Samuel Ver Hoeye, technical coordinator of the project.

When submitted to electromagnetic waves, graphene behaves in a non-linear way. David Gómez from ITMA Materials Technology, commented, “It functions like a kind of frequency multiplier. If we make a wave of a particular frequency impinge on graphene, the graphene will emit another, higher, frequency.”

This property of graphene is allowing scientists to emit, in the terahertz band, a band of frequencies which until now have mostly been achieved in experimental settings and which are lower than infra-red but higher than the frequencies used by mobile phones and satellite communications. For this reason, “beginning to use it means filling a niche that exists between the frequency bands of other technologies that have already been developed,”said Javier Gutiérrez.

Besides inspecting paintings, which have a planar surface, the researchers are testing and adjusting the scanner in order to be able to generate images of sealed three-dimensional objects. For this, a structured-light scanner will be combined with the terahertz scanner. Geert Willems, Director R&D of 4DDynamics explained the benefit: “By reconstructing the 3D shape of the objects, we can help guide the terahertz scanner to the optimal positions around the curved shape of the objects, while making sure the scanner does not come in actual contact with the artwork.” 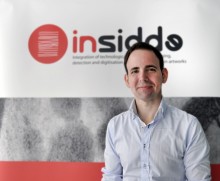 optics.org interviewed Javier Gutiérrez, the coordinator of Insidde, about the development of the project’s graphene-based sensor, further details of its functioning and application and implications for artwork research and restoration.

What has been newly developed by the INSIDDE project?

JG: Graphene-based transmitters and receivers have been designed and fabricated to be integrated into a terahertz scanner that works in multiple bands from 0.2 to 1.1THz. The system also incorporates a focusing system and a laser sensor to improve spatial resolution and accuracy, allowing the consortium to scan paintings and pottery in reflection mode. Graphene films act as frequency multipliers due to its non-linear behavior.

How does the sensor/scanner work?

It really works like other scanners: a transmitter generates the wave that impinges on the artwork and it is reflected back to a receiver. We have developed it from scratch and this is the main reason why it will not be commercialized in the short term. Nevertheless, in this last phase we are studying different options such as offering consulting services.

How is this approach better than conventional optical scanning by microscopy?

Although there are currently multiple techniques to carry out this type of studies and some of them are also non-invasive, terahertz technologies can complete the information obtained by means of X-rays or infrared reflectography because, in general terms, its penetration depth is lower than the former but higher than the latter. Therefore, we can say the project concentrates on the intermediate layers between the gesso and the varnish in paintings and on the clay and the characterization of contents in ceramics.

We expect – and the preliminary results indicate this – to be able to distinguish among materials with different widths and thus to be capable of analyzing each layer independently. This will give an idea of the original sketches, how they were modified by the artist or the order in which the paint or brushstrokes were applied. It could also magnify the visualization of pentimenti or discover underlying works.

What are likely outputs at the end of the project and next steps?

We will have the graphene-based transmitters and receivers, which may be useful in other sectors. Moreover most of the algorithms developed for image processing are freely available in Matlab Central. The augmented reality application is almost ready to be used in the pilots.

The graphene scanner process is shown in the following video produced by Euronews: