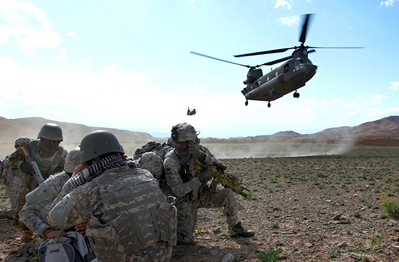 Countermeasure is based on an organic, robust, and secure laser technology.

BAE Systems has announced the successful completion of a key milestone in the development of the US Army’s Common Infrared Countermeasure (CIRCM) program.

BAE Systems says its significant achievement, known as the Technology Development Bridge Program, positions the company as a reliable provider of lightweight, low-cost, and modular laser-based aircraft protection systems to protect US Army aircraft from infrared guided missiles. The 12-month, $11 million undertaking was awarded by the US Army to enable further development following the two-year CIRCM technology demonstration phase.

Terry Crimmins, vice president and general manager of Survivability and Targeting Solutions at BAE Systems, commented, “Our CIRCM solution is based on a non-commercially available, organic, robust, and highly secure laser technology, which maximizes the use of the US industrial base. Working with the US Army, we have collectively delivered a model product that has reduced engineering manufacturing and development risks significantly, and is adaptable to the ever-changing global threat environment.”

The ATIRCM system, which has been credited with saving aircraft and troops from infrared-guided missile attacks in theater, has demonstrated how delivering this level of reliability can significantly reduce the total ownership cost of the system while ensuring mission readiness.

BAE Systems was awarded an initial contract in 2012 to compete in the CIRCM TD phase and submitted its Engineering Manufacturing and Development proposal in November 2014. Later this year (2015), the Army plans to award a 26-month contract for the EMD, and delivery of 21 CIRCM systems. 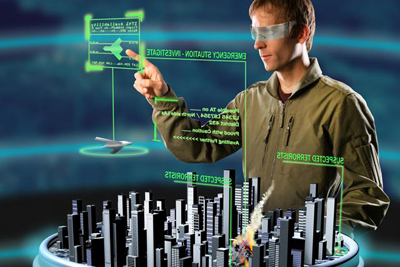 BAE's approach to AR identifies an optimal balance between the real world and the virtual.

British engineers from BAE Systems are working in collaboration with academics at the UK’s University of Birmingham to develop applications for this ground-breaking technology concept, which “mixes together” the real and virtual worlds to allow operators to take real-time control of their environments.

Developments include a briefcase-sized portable “command center” that can be easily deployed and set-up anywhere to tackle emergency scenarios by creating a “virtual information-rich workspace”, and a “wearable cockpit” to provide pilots with a customizable environment to enhance their situational awareness while also reducing the cost of cockpit upgrades.

This revolutionary concept called “mixed reality” allows the operator to see themselves and their surroundings along with virtual images, video feeds, objects and avatars, seamlessly bringing together the critical battlefield elements in a single place.

BAE Systems says the technology is brought to life by an Oculus Rift-style headset, which allows military commanders to direct military operations, such as troops and UAVs, across a virtual representation of the landscape for real situations or simply as part of a training solution. The company adds that the technology is being developed at such a pace that the current demonstrator headsets could be replaced with something as small and light as a pair of spectacles within a decade and a contact lens within 20 years.

Nick Colosimo, Futurist at BAE Systems, said, “We’re already seeing virtual and augmented reality becoming more commonplace in consumer products, and the possibilities it offers the armed forces are hugely exciting. Through collaborating with the University of Birmingham, we are able to bring together some of the best minds available in this subject area to develop these concepts and evolve the technology itself.”

The Augmented Reality development is described in the following video: