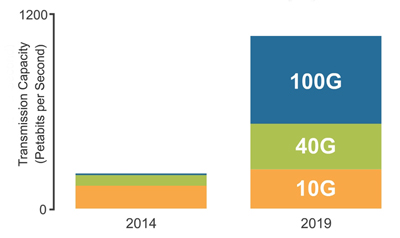 100G to make up over 50% of data center optical transceiver transmission capacity by 2019.

In the optical communications markets, demand for 40G transceivers is now “ramping up hard” as data centers deploy 40GbE (Ethernet), particularly as a high-density 10G interface via breakout cables. Also, 40G QSFP (quad small form factor pluggable) demand growth over single-mode fiber is the consequence of large shipments to internet content providers Microsoft and Google. These are the key conclusions of the latest transceiver market analysis by IHS Infonetics.

Andrew Schmitt, research director for carrier transport networking at IHS Infonetics, commented “The market for 100G data center optics is accelerating, but it has yet to be turbocharged by widespread data center deployment in the way 40G QSFP optics have. This will change dramatically in 2016 as cheap 100G silicon reaches production and QSFP28 shipments surge as a result. Next year is going to be huge for 100GbE.” 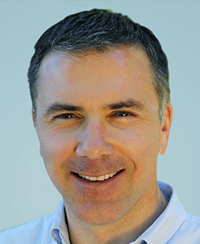 Schmitt told optics.org why he expects to see a significant change in the 100G datacenter market place next year: “All of the key components needed for low cost 100GbE will be in place, including QSFP28 optics. The large internet content providers are all planning to shift to 100GbE in 2016 and this will drive enormous sales volumes.

“The main types of optical communications devices in demand will be CFP2-ACO [CFP2 form factor pluggable analogue coherent optics] based on indium phosphide. This will be the breakout technology for photonic integration. I don't think 2016 will be a breakout year for silicon photonics, except in PSM4 QSFP28 applications, which will ramp.”

So which suppliers can expect to have significant market positions if these forecast changes come to pass? Schmitt commented, “I think the leader in CFP2-ACO will be Oclaro. The likes of Luxtera and Innolight will appear in 2km solutions, although the usual suspects, including IBM and Intel will likely be there as well.”

The expected growth in sales of relatively new technologies will be accompanied by a corresponding fall in older, alternative technologies. Schmitt said, “The IHS Infonetics numbers clearly show that 10G is already dying in the WDM area. The forecast growth for datacenter optics is really about the large-scale internet content providers moving very rapidly towards 100Gb Ethernet.”