Rofin on the up as fiber laser sales rise 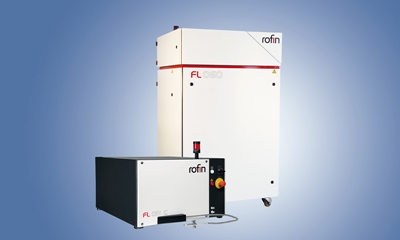 Industrial laser firm Rofin-Sinar has reported a sharp increase in both orders and profits in its latest financial quarter.

The company’s stock price rose in value by more than 10 per cent as the results were made public, indicating that investors were taken by surprise with the positive outlook presented by CEO Günther Braun and his team.

“Our second quarter results confirm that our strategic and technological initiatives are growing our business and improving profitability,” he said. “Net income and earnings per share nearly doubled year-over-year and we see further improvements in the gross margin as well as positive effects from our operating expenses cost controls.”

The CEO pointed out that Rofin’s long-standing efforts to improve the design of its kilowatt-scale fiber laser products was now starting to bear fruit. Its third generation of high-power lasers feature more cost-effective module design, translating to higher profits for Rofin.

And with the company also starting to use much more of its home-grown laser diode chips to drive those fiber lasers, profit margins should continue on their upward trajectory.

Revenues in the latest quarter were helped by strong sales level into the automotive sector, Braun added, along with robust demand from customers in the machine tool, medical device and semiconductor sectors. Even the long-dormant solar sector showed some signs of life, he said, with a large order from a major Chinese PV manufacturer.

Fiber lasers in demand
At $122.7 million, Rofin’s total sales for the quarter were actually down 5 per cent on the same period last year. But that figure was still within the expected range – despite some negative currency effects – and orders of $141 million indicate that the remainder of 2015 is looking strong for the company.

According to Braun, the company booked a record number of orders for its high-power fiber lasers in the March quarter, while Rofin’s new “Filaser” ultrafast process technology for cutting brittle materials like glass also attracted some attention from a potentially major customer.

“Another highlight in bookings was high order intake during the quarter from the solar industry, in particular from China, where we see potential for additional orders in the coming months,” the CEO said. He added that a backlog of $160 million at the end of March represented one of the highest such figures in the company’s history, while order entry in the quarter included 130 requests for high-power fiber lasers.

All those positive developments mean that Braun and colleagues have increased their earnings target for the year ending September 30, with net income profitability expected to tick up to 8 per cent of revenues, assuming that sales estimates are met.

The strong order patterns mean that despite the adverse effect of the relatively strong US dollar, the Rofin team is maintaining its revenue guidance of between $515 million and $535 million for the full year. With sales for the first half of the year having now reached $245 million, the second half should show a big increase in revenues as more high-power fiber lasers are shipped.

Braun said that most of that fiber laser growth was coming from cutting OEMs, with contributions from welding and 3D manufacturing applications also increasing. Rofin is now able to offer fiber lasers with up to 2 kilowatt output based on a single high-power module, seen as a particularly attractive option for volume customers in China.

The CEO also hinted at growing demand from the military sector, where high-efficiency fiber lasers are key building blocks in the emerging field of directed-energy weapons.