Booming demand for intraolcular lenses and surgical microscopes as the Zeiss affiliate targets annual sales of up to €1 BN. 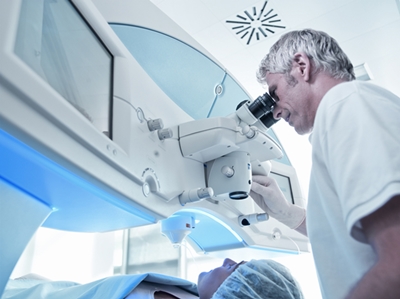 Carl Zeiss Meditec, the healthcare-focused affiliate of the optics giant Zeiss, says it is on track to post annual revenues of up to €1 billion after a positive start to its latest financial year.

For the first six months of the Jena company’s fiscal year ending September, Zeiss Meditec reported sales of €498 million as demand for new kinds of intraocular lenses and the relatively weak euro currency combined to drive sales up 8 per cent on the same period last year.

After currency effects are stripped out, the growth figure falls to 3.7 per cent, and the overall increase was due largely to the company’s “surgical ophthalmology” unit. It delivered sales of €173 million – up 15 per cent, even after correcting for the weakened euro.

“This business unit benefited in particular from the growing demand for innovative intraocular lenses and multifocal and toric premium lenses for minimally invasive cataract surgery,” wrote Zeiss Meditec in its half-yearly report, adding that demand for surgical microscopes used in ophthalmic surgery had also been strong.

The company’s largest unit by sales, its “ophthalmic systems” division, saw revenues rise 2.4 per cent after currency effects, to €183.2 million, while the “microsurgery” division reported a drop in sales to €141.7 million – although that was in comparison to a very strong figure a year ago when Japanese customers raced to beat a VAT increase.

Liquid lens
One factor helping to boost revenues this year is the full effect of recent acquisition Aaren Scientific – a developer of advanced intraocular lenses that was snapped up by Zeiss Meditec in early 2014.

In his introduction to the latest financial report Meditec’s CEO Ludwin Monz highlighted that acquisition, writing that the “CT LUCIA” intraocular lens - manufactured at the Aaren headquarters in Ontario, California – was the kind of product that would drive up future sales.

That should be complemented by the new Humphrey Field Analyzer 3 (HFA3) instrument for glaucoma diagnosis, which the company launched earlier this year. It is being promoted as the latest in a line of “gold standard” diagnostic tools for the debilitating eye disease.

Although the HFA3 uses the same visual field testing approach that has been employed in glaucoma screening for more than three decades, the latest version of the equipment is the first to feature a proprietary liquid lens. It is said to save time, simplify setup and reduce the potential for human error.

In the test procedure, known as “perimetry”, a trial lens provides the refractive correction needed for patients to see clearly during the visual field test. The liquid lens automatically delivers the appropriate refractive correction for nearly any patient (up to +8 or -8 diopters), using data entered into the instrument.

With the fiscal year off to a solid start, Monz and his colleagues are setting themselves a sales target of between € 960 million and € 1.0 billion for the full 12 months. That would represent a sharp increase on the €909 million sales figure posted last year.