US 'must get serious' about laser weapons

Report from influential US think-tank calls for a more cohesive approach to development and deployment of directed-energy technologies. 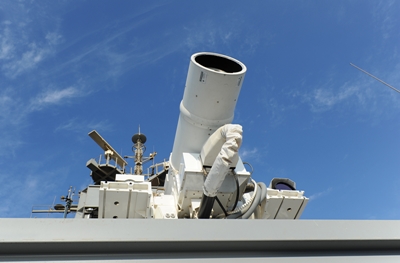 The US Department of Defense (DOD) must change its approach to the development of laser weapons, if the technology is to live up to its promise as a game-changer for the country’s military.

That’s according to a report just published by the Center for a New American Security (CNAS) think-tank, which is urging a more cohesive strategic program to develop and deploy lasers and other directed-energy (DE) weapons, rather than the current and more disparate project-led approach.

Written by the Lawrence Livermore National Laboratory’s deputy program director for defense, Jason D. Ellis, a policy expert currently on leave at CNAS, the report makes a series of recommendations, including the call for a DOD “champion” to lead development of the technology.

Though small and only eight years old, CNAS is believed to have a growing influence in Washington, DC, and appears to have close links to President Obama’s current administration. Its two founders have both served in government posts, while Hilary Clinton was among the speakers at its June 2007 launch event.

Technological "orphan"
“The DE weapons area is a technological orphan – influenced by many and owned by none,” writes Ellis, whose first recommendation is for the DOD to develop and communicate a department-wide strategic plan for DE weapons development.

He says that the US secretary of defense should identify and empower a champion within the DOD who can also be held accountable for DE weapons development. “Today, the department has lost a cohesive focus in the DE area,” Ellis writes, noting that the DOD’s current research and engineering strategy does not emphasize DE weapons.

“While there is clear benefit in joint technology developments, a joint program office could potentially play a stronger role in driving focused programmatic outcomes in the context of identified time and budget constraints.”

Ellis points out that while the US Navy has centralized responsibility for DE weapons to a single office, other services do not have such a clear center of gravity – perhaps because through the recent deployment of a 33 kilowatt laser gun aboard the USS Ponce, the Navy is more advanced in terms of real-world experience of a laser weapon.

“Ultimately, for DE weapons to become serious candidates for the department’s new offset strategy, DOD must become serious about their development,” states Ellis in the report’s conclusions. “[The] DOD has made substantial technical advancements in both high-power microwaves and high-energy lasers over the past several years, and the state-of-the-art would arguably permit accelerated development options in key areas.”

“But on their current course, existing and anticipated developmental activities for the full range of enabling and component technologies will not likely lead to fielded, operationally relevant DE weapon systems for the next several years,” he adds. 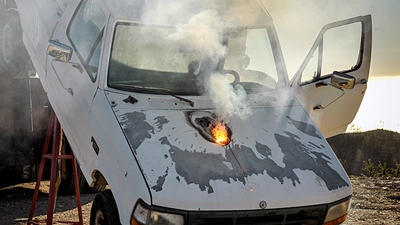 Increase laser weapon spending
Part of the answer is simply to spend more on the development of the technology. Ellis calculates that, out of a total DOD research, development and test budget of $63 billion in 2014, just $405 million (or 0.6 per cent) was allocated to DE weapons.

When adjusted for inflation, that spend has declined nearly two-thirds from the 2007 figure, when major projects including the Airborne Laser were still being funded.

The ultimate scrapping of the Boeing-led Airborne Laser project, whose megawatt-scale chemical source relied on bulky and toxic materials, means that laser weapons are perceived by many as a colossal waste of money.

However, the class of weapons now under development is generally based around much more practical solid-state sources that can be combined in different ways to deliver the power needed to disable or destroy targets. Despite the perception that lasers have always promised more to the military than they have delivered, Ellis believes that a substantial rise in developmental spending is now justified.

“If [the] DOD is to field operationally meaningful DE weapons, it should increase spending by two to three times for high-energy lasers,” he says, adding that the department should both look to deploy existing laser technologies for near-term applications like drone destruction, and invest in the longer-term development of much more powerful sources to be used against higher-end threats like ballistic and cruise missiles.

HELLADS potential
Looking positively at the technology currently available, Ellis says that although it does not necessarily offer any “unique warfighting capability” just yet, there may still be some near-term opportunities to demonstrate the usefulness of laser and other DE weapons in the field.

He identifies the 33 kW fiber laser system tested by the USS Ponce and the 150 kW High-Energy Liquid Laser Area Defense System (HELLADS) being developed by the US Air Force and DARPA as two of the best near-term options, and adds that recent research by a team at the Lincoln Laboratory supports the idea that wavelength combining could be used to scale laser powers well beyond the 100 kW level, and towards the megawatt-class systems previously envisaged with chemical lasers.

“Based on the Navy’s reportedly promising November 2014 Persian Gulf tests, the 33-kilowatt system establishes a reasonable foundation to proceed with development of a scaled-up 100-150 kW (or higher) system,” Ellis writes. 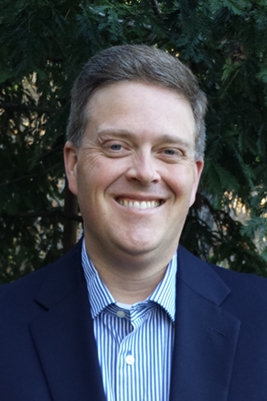 “Once it has achieved this higher-power metric at acceptable beam quality, the Navy should consider limited-quantity procurement for operational deployment to a relevant operational theater.”

Regards HELLADS, Ellis says that once the system demonstrates 150 kW output in the laboratory with an acceptable beam quality, it should be tested in an operationally relevant environment.

"Get serious"
Ultimately, he says that the DOD needs to “become serious” about the development of laser weapons, if those weapons are to actually provide the US military with genuine superiority over its adversaries.

And while he adds that they should not be considered “silver bullets”, Ellis says that laser weapons have finally demonstrated the kind of technical maturity that should see them integrated into naval, air and ground-force mission applications within the next decade.

• The CNAS report Directed Energy Weapons: Promise and Prospects by Jason D. Ellis can be downloaded for free here.