Said to be largest PV project ever completed for a national assembly building. 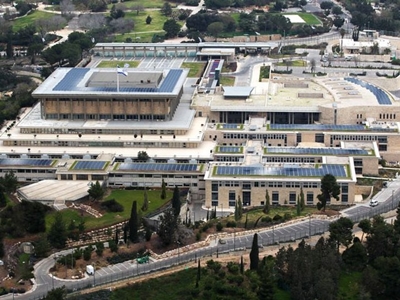 The roof of the Israeli government’s Knesset building in Jerusalem is now home to a 450 kW photovoltaic array – said to be the largest solar installation yet constructed for a parliamentary location.

According to the Israel Ministry of Foreign Affairs, some 1500 solar panels have been unloaded onto the roof over the past few weeks. Largely from Chinese module supplier JA Solar, they occupy a space of 4650 square meters.

Expected to provide around 10 per cent of the Knesset’s electricity requirements, the installation cost NIS 2.4 million (around $0.6 million). Along with hundreds of new LED bulbs to provide high-efficiency solid-state lighting and other environmental measures, it is expected to cut the parliamentary building’s energy requirements by around one-third.

The solar array itself is set to save NIS 300,000 ever year, meaning that it should have paid for itself after eight years of operation.

"Energy revolution"
In a release from JA Solar, Knesset Speaker Yuli Edelstein was quoted saying: "What is happening before our eyes is a true revolution in energy conservation. It is not just the solar panels; it is a turning point with regards to the environmental awareness revolution that we have been promoting for the past two years.”

JA Solar president Jian Xie said that the Shanghai-headquartered company had shipped 450 kW of its modules to the Israeli parliament, suggesting that it was the sole supplier for the installation.

“This iconic solar project is of great significance in terms of developing clean and renewable energy in the country,” he added.

The Israeli government first announced details of the “Green Knesset” project in early 2014, and expects to save around NIS 1 million every year in energy costs once the full suite of efficiency measures have been completed.

Some of those savings are set to be transferred into a special fund designated for future “green” measures.

Over the past few years, JA Solar has emerged as one of the world's largest manufacturers of PV modules, and the Knesset installation appears to be one of a number in new and unusual locations.

The company also claims to have delivered more than 100 MW of panels to the UK recently, a market that to the surprise of many turned out to be Europe's largest in 2014.

More recently JA Solar says it has made a number of large deployments in the South Pacific, providing modules for national projects in New Zealand, Fiji and Papua New Guinea, as well as the tiny Pacific countries of Tuvalu and the Cook Islands.

In New Zealand, a 350 kW array at a shopping center in Auckland is said to be the single largest solar installation in the country.