ASML's recent growth has been in line with its guidance.

Netherlands-headquartered ASML, the world’s largest supplier of photolithography systems for the semiconductor industry, has reported its first-quarter of 2015 financial results. The company announced that Q1 net sales “were in line with guidance" at €1.65 bn, with a gross margin 47.2%.

Furthermore, ASML forecast that its Q2 2015 performance would be rather similar with expected net sales of around €1.6 billion and a likely gross margin of around 45%.

Peter Wennink, ASML’s President and Chief Executive Officer, commented, "Our first-quarter net sales came in as guided at €1.65bn, driven by continued strong DRAM memory segment sales in combination with higher foundry segment sales. Our gross margin rose to 47.2%, a reflection of product mix as well as better utilization of our production facilities, which was partly offset by unfavorable foreign exchange effects.

”Our Q2 guidance of around €1.6bn of net sales confirms our earlier expectation that the first half of 2015 will be stronger than the second half of 2014. In memory, our Q1 sales and order book suggest that sales to the DRAM segment will stay healthy in 2015, although more weighted to the first half of the year.

"In logic, we expect stable sales throughout 2015. Our service and field options sales will likely increase over coming quarters as we benefit from increased adoption of our Holistic Lithography products and the purchase of system node enhancement packages supporting customer node migrations."

"Regarding our EUV program, our focus for 2015 is to continue the recent encouraging progress on source power and productivity, to increase stability and availability of the systems as well as to ship our fourth-generation EUV system, the NXE:3350B." 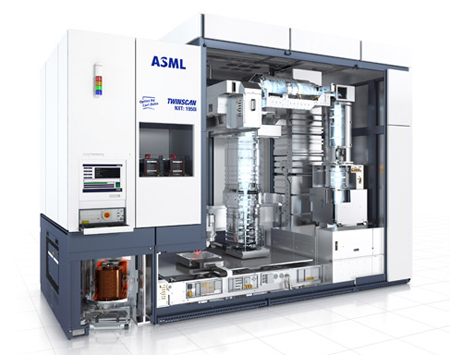 The company reported that through 29 March 2015, it had acquired 1.4 million shares under this program for €129m.These shares have been purchased to cover ESOPs: “The share buyback program will be executed within the limitations of the existing authority granted by the AGM on April 23, 2014 and of the authority granted at future AGMs.“