Nokia to take over Alcatel-Lucent in €15.6bn deal

New-look Nokia will be “innovation leader” in next-gen technology and services for IP connected world. 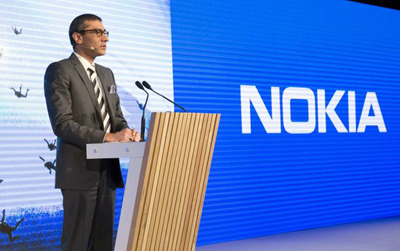 Following much media speculation about Nokia’s and Alcatel-Lucent’s merger plans, Nokia today confirmed the companies' intention to “combine” - with Nokia effectively taking over Alcatel-Lucent in an all-share transaction worth €15.6bn ($16.5bn). A Nokia statement said the deal will "create an innovation leader in next-generation technology and services for an IP connected world”.

The two companies have entered into a memorandum of understanding under which Nokia will make an offer for all of the equity securities issued by Alcatel-Lucent, through a public exchange offer in France and in the United States, on the basis of 0.55 of a new Nokia share for every Alcatel-Lucent share.

Each company's Board of Directors has approved the terms of the proposed transaction, which is expected to close during the first half of 2016. The deal is still subject to approval by Nokia's shareholders, completion of relevant worker consultations and other customary conditions.

The combined company will be called Nokia Corporation, with headquarters in Finland and a strong presence in France. Risto Siilasmaa is planned to serve as Chairman, and Rajeev Suri as Chief Executive Officer. The combined company's Board of Directors is planned to have nine or ten members, including three from Alcatel-Lucent, one of whom would serve as Vice Chairman.

Assuming the closing of the transaction in the first half of 2016: the combined company expects €900m of operating cost synergies to be achieved on a full year basis in 2019; it also expects to save €200m in annual interest costs by 2017. Nokia estimated the likely combined 2014 sales of the two components of the new company would have been €25.9bn; combined operating profit of €0.3bn; and net cash at December, 2014 of €7.4bn.

Rajeev Suri, President and CEO of Nokia, commented, "Together, Alcatel-Lucent and Nokia intend to lead in next-generation network technology and services. We have hugely complementary technologies and the comprehensive portfolio necessary to enable the internet of things and transition to the Cloud. We will have a strong presence in every part of the world, including leading positions in the United States and China.”

Michel Combes, CEO of Alcatel-Lucent, added, “This combination will offer a unique opportunity to create a European champion and global leader in ultra-broadband, IP networking and cloud applications. This transaction comes at the right time to strengthen the European technology industry. We believe our customers will benefit from our improved innovation capability and incomparable R&D engine under the Bell Labs brand.”

Nokia today said that the combined company will benefit from several significant innovation resources, with Alcatel-Lucent's Bell Labs and Nokia's FutureWorks, as well as Nokia Technologies, which will stay as a separate entity with a clear focus on licensing and the incubation of new technologies.

With more than 40 000 R&D employees and spend of €4.7bn in R&D in 2014, Nokia says the combined company “will be in a position to accelerate development of future technologies including 5G, IP and software-defined networking, cloud, analytics as well as sensors and imaging.”

Nokia described the respective portfolios and geographies of the two companies as being “highly complementary, with particular strength in the United States, China, Europe and Asia-Pacific. They will also bring together the best of fixed and mobile broadband, IP routing, core networks, cloud applications and services. This combination is expected to create access to an expanded addressable market with improved long term growth opportunities.”