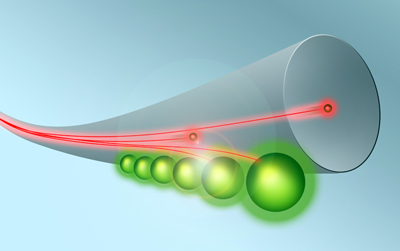 Atoms coupled to a glass fibre slow down light.

An important step towards quantum teleportation was taken at TU Wien (Vienna University of Technology). By coupling photons to atoms, light in a glass fiber can effectively be “slowed down” to the speed of an express train (actually around 50m/s). For a short while it can even be brought to a complete stop, the researchers say. The work has just been published in Optica.

Photons are an extremely useful medium for quantum communication, but light has one major disadvantage: it conventionally travels at the speed of light and usually cannot be kept in one place. A team of scientists at the Vienna University of Technology has now demonstrated that this problem can be solved – not only in unusual quantum systems, but in relatively conventional optical fiber networks already in widespread use today.

By coupling atoms to glass fibers, the light can be slowed down to a speed equivalent to 180 km/h. The team has even managed to bring the light to a complete stop and to retrieve its photons in motion again later. Such a technology, say the researchers, is an important prerequisite for developing a future glass fiber-based quantum-internet, in which quantum information could be teleported over relatively large distances.

In a vacuum, the speed of light is always a constant 300 million m/s, or so. When light is transmitted through a medium such as glass or water, it is slowed down a little bit due to its interaction with the material. “In our system, this effect is extreme, because we are creating an exceedingly strong interaction between light and matter”, says Professor Arno Rauschenbeutel (from TU Wien and the Vienna Center for Quantum Science and Technology). “The speed of light in our glass fiber is only 180 kilometers per hour. Any express train could top that.” 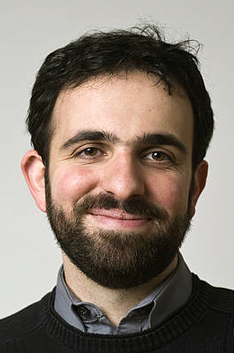 Fellow researcher Clément Sayrin, a post-doc in the Rauschenbeutel Group at TU Wien, added, “There are different ways of quantum-mechanically transferring information. Glass fiber technology is a particularly attractive option – after all, a worldwide glass fiber network already exists, and we are already using it to transmit data.”

At the TU Wien, cesium atoms are coupled to an ultrathin glass fiber. When the atom absorbs laser light it can pass from a state of low energy to a state of higher energy – provided that the energy of the absorbed photon matches the energy difference between the two states. This light, however, cannot be retrieved in a controlled way.

That is why the Viennese team used an additional control-laser in their experiment, which couples the high-energy state to a third atomic state. “The interplay between these three quantum states prevents the photon from just being absorbed and randomly emitted. Instead, the photon’s quantum information is transferred to an ensemble of atoms in a controlled way, and it can be stored there for some time.” The photon is turned into a collective excitation of atoms.

After two microseconds, a period of time in which the light would normally have travelled about half a kilometer, the control laser was used to prompt the atoms to emit the light back into the glass fiber. The properties of the photon stay exactly the same – which is an important prerequisite for quantum communication.

Being able to store photons is an important technological step towards quantum communication over great distances. “Quantum physics allows us to create a connection between sender and receiver, which makes eavesdropping impossible,” added Arno Rauschenbeutel. “The fundamental laws of quantum physics make sure that no one can tap the connection without being noticed.”