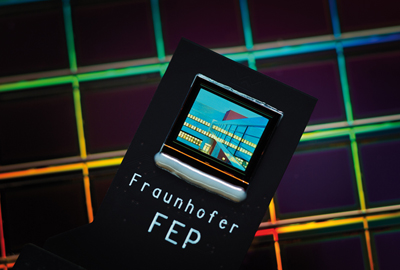 The Fraunhofer Institute for Organic Electronics, Electron Beam & Plasma Technology (FEP) has been working for a long time on the development of OLED micro displays that combine display and camera functions. Their latest work will be at this week's Hannover Fair (13–17 April, on the TU Dresden booth, Hall 2, A38).

The fast-growing world of wearable technologies is colorful and versatile: wrist bands measure the pulse, buttons herald the arrival of e-mails with color change and spectacles provide interactive information about the environment.

Since 2012, the Fraunhofer FEP has been refining its pair of glasses that give the wearer simultaneous viewing of the surrounding environment and of digital information projected directly into the user’s field of view, which can even be controlled by eye movement.

Thus, a technician can read a manual while working and scroll the pages with his or her eyes without interrupting working activities. This is possible with the integration of a so-called bidirectional OLED microdisplay, which is a display element that includes an embedded image sensor. The sensor can record the user’s eye movement with this integrated camera and thus enables an interaction with the displayed information.

A full-color OLED microdisplay has now been developed by the scientist where the display as well as the integrated camera functions have SVGA resolution (800 × 600 × RGBW).

Bernd Richter, Head of IC and System Design at the Fraunhofer FEP, where the new display was developed, commented, “The new generation of bidirectional microdisplays represents a quantum leap in many ways. And all essential key parameters of this chip could still be improved significantly.

"These improvements could include increased resolution of the display and the image sensor as well as an enhanced color depth and the integration of further important components directly into the microdisplay chip. By this means, the microdisplay could be operated with significantly fewer external components, which could contribute to further development of miniaturized and efficient systems.”

To ease customer-entry into these new technology areas, the FEP scientists are offering development kits in various configurations. The new microdisplay can be transferred directly into product-specific applications. Moreover, fast and cost-efficient customer-specific adaptations and further developments towards innovative microdisplays are possible, which are based on an efficient design methodology of the Si-CMOS backplane circuit.

Part of the development work was financed by the German Federal Ministry of Education and Research (BMBF) and by the Fraunhofer-Gesellschaft.