Investment in fiber-optic sensing systems for oil prospecting and delivery reduced and delayed - but growth will return say analysts. 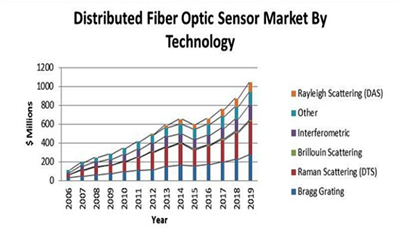 Dip in the middle - but oil industry investment in photonics will resume.

The global distributed fiber optic sensor market was valued at $585 million in 2013, and projected to approach $1.5 billion in 2018 with 70% of sales associated with the oil and gas segments.

But now a revised market forecast, recently conducted by the Photonic Sensor Consortium (PSC) and published by Information Gatekeepers, says this value will not be achieved because growth is being “negatively impacted” by the unexpected drop in oil prices through 2014. PSC maintains that “the long-term picture is still optimistic, but short-term contraction is likely”.

Distributed fiber optic sensors support smart systems in a variety of applications. PSC notes that initial commercialisation efforts focused on military applications. However, the previously booming need for sensing in harsh environments and the corresponding development of rugged optical fiber technology has significantly benfited the oil and gas industry.

These smart sensing systems provide a range of benefits throughout the life of a well from exploration to drilling and completion, production and reservoir management. The report notes, “There is no other technology that can provide critical process control information spatially throughout the [oil or gas] well in real time over long periods. Without smart well technology, fracture monitoring and analysis and applications like steam-assisted gravity drainage would be difficult to effectively implement.”

There are several reasons why there is such a strong interest in this technology: fiber optic sensors represent a technology base that can be applied to a multitude of sensing applications. Moreover there are several characteristic advantages that make the use of fiber optics especially attractive for sensing: nonelectrical, explosion-proof, compact and lightweight, allowing access into inaccessible areas and harsh environments, high accuracy, and easily distributed. 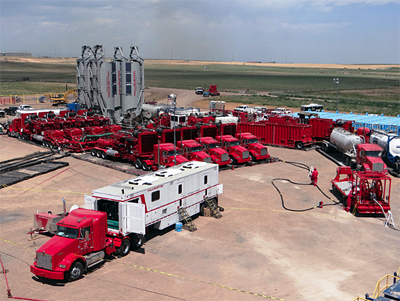 He told the San Francisco audience of senior photonics industry figures, “Despite the recent fall, the oil price looks like it may be stabilizing again at about the $50 per barrel mark [it had peaked at $115 in June 2014]. I think that in February 2015 oil is some way below its longer-term stable price. And a lot of people in the industry expect that it will increase again soon. In 15 years time I won’t be surprised if it’s greater than $160 per barrel.”

Jones listed numerous opportunities for photonics-based systems, including hydraulic fracturing (fracking). Such devices need to be able to cope with extremely harsh conditions, including temperatures up to 450°F (230°C), a wide range of acidic and alkaline solutions, pressures of 30,000psi (2000bar), and extreme vibration.

“The biggest opportunities in oil and gas include pipeline hydrocarbon content assessment and measurement, because we really have to know what’s flowing through at any time,” Jones told the seminar. “We also need to have reservoir production monitoring down-hole, so that we can see any changes in chemistry in real time.”

He added that there was now a huge emphasis on fracking in certain markets. “We need to be able to assess the water supply because this process uses a lot of water. Recycling that water is desirable, and optical monitoring of the flow-back water could solve a lot of problems.”