European solar installations down 36% in 2014

UK the only bright spot as the European Photovoltaic Industry Association (EPIA) issues preliminary results of its annual survey. 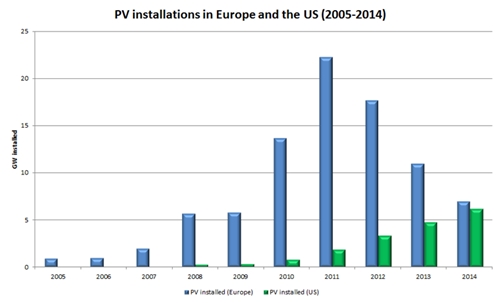 US catching Europe: PV installations over the past decade (click to enlarge)

The European Photovoltaic Industry Association (EPIA), one of the most respected collectors of data on solar installations, says that only 7 GW of additional solar power was connected to Europe’s grids in 2014 – down 36 per cent on the figure for 2013.

In its first public announcement of figures for last year, made at a workshop event held in Brussels, Belgium, last week, the EPIA said that it thought the global solar market had grown by 8 per cent to around 40 GW in 2014 - less than analysts had generally predicted.

That increase has been driven largely by installations in Asia, and China and Japan in particular, as well as in the US ahead of a looming change in tax incentives there. In Europe, which has previously dominated the solar scene thanks largely to heavy investments in Germany, the UK was the only major country to show strong growth last year.

“The solar boom in the UK is the only highlight in Europe these days,” opined the EPIA, with its CEO James Watson adding: "At a time [when] solar power has lower cost than retail and often even commercial electricity, it is hard to understand why governments are not pushing much harder to tap the technology's potential as the European Union is looking for sustainable and secure energy supply.”

Uncertain times
The EPIA typically releases its annual report on global solar installations, regarded as one of the most credible available in the industry, in May or June. In last year’s report and forecast through 2018, its analysts highlighted that European solar installations had peaked at 22 GW in 2011, and warned of an uncertain future.

Now it looks as though installations in 2014 have come in at the low end of EPIA’s forecast – its “medium” scenario having predicted around 8.5 GW.

The 2.3 GW installed in the UK last year should mean that the country now has a cumulative capacity of about 5.7 GW. And despite the growth in 2014, that is still way behind Germany’s cumulative total of around 36 GW.

While Europe’s PV market has now slumped by two-thirds since the 2011 high point, the US – and California in particular – has just registered a record-breaking year.Earlier this month the US Solar Energy Industry Association (SEIA) and Greentech Media reported that 6.2 GW was installed across the US in 2014, up 30 per cent on 2013 and closing in on Europe. However, the boom is only expected to last until the expiry of a 30 per cent solar investment tax credit (ITC) at the end of next year – something that developers are rushing to meet.

California is leading that boom, having added some 3.5 GW of capacity in 2014 according to the SEIA/Greentech figures.