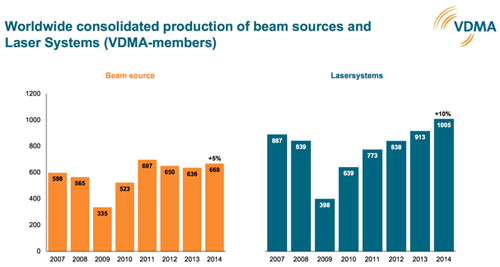 Annual production of laser-based manufacturing systems made by companies at German locations for the first time exceed the billion euro mark, according to data compiled by the German Engineering Federation (VDMA), Laser and Laser Systems division.

In 2014, VDMA member companies produced about €852m of laser-based machines, corresponding to an 11% growth over 2013 . Global consolidation – the output following allowances for the added value created by international players – records €1.01bn, representing 10% growth over 2013. Furthermore, growth was considerably greater for systems equipped with solid-state lasers rather than older technologies.

The global market 2014 for laser material processing systems, according to evaluation by Optech Consulting, grew by 8% achieving €8.7bn. The 2013 increase of 4% in incoming orders, which was more moderate than actual production, rose 20% in 2014 to a significant €1.04 bn, mainly driven by foreign demand.

The VDMA also reports that laser system exports (from Germany) were “highly pleasing” in 2014, growing by 16% to €664m, “underlining the extraordinary competitiveness of German suppliers in world markets,” the industry group added. Export share compared to production value rose to 78%. Export markets in Western Europe showed renewed growth and there were also “powerful contributions” from the USA, China and Japan, although only a slight growth for “Other Asian countries” such as India, Korea, Taiwan and other parts of Southeast Asia. 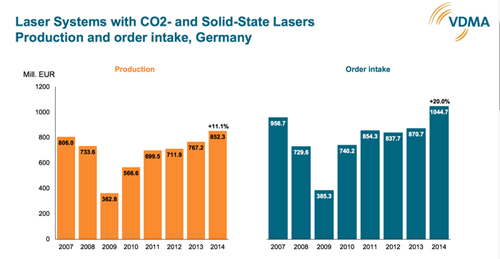 The VDMA commented, “The global consolidation of production volume yields a performance level that is considerably more meaningful, namely €668 million or about a third greater than the result in Germany itself, as well as a 5% rate of increase. These records comprise CO2 lasers, solid-state lasers and diode lasers for direct application.

2014 exports of laser beam sources recorded a value of EUR 302 million, or a 15% growth. The share compared to production value rose to a present healthy 61%. Against the 2013 structure expressed as destination region and country shares, the Western European and Asian destinations showed marked growth, with Central / Eastern Europe following in moderation. In the USA, the reference year experienced a strong growth caused by punctual large orders. Owing to this base effect, the current US-share proved considerably lower.