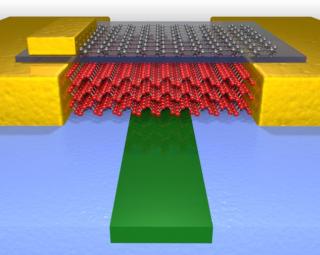 In the black: a more responsive photodetector

A team from the University of Minnesota has constructed a photodetector designed to exploit the optical and electronic properties of black phosphorus (BP), and found that it offered significant practical advantages over circuits built around graphene. The results were published in Nature Photonics.

The research provides further evidence of the role two-dimensional materials and related structures can play in the design of optical communications circuits, along with the potential for BP to be employed in commercially viable systems.

The black and most thermodynamically stable allotrope of phosphorus was only recognized as a potentially useful two-dimensional semiconductor in early 2014, when it was incorporated into high-performance field-effect transistors.

As the Minnesota team realized, BP's bandgap of around 0.3 eV in bulk allowed some further exploitation in infrared applications. Some preliminary papers from other groups investigating exactly this aspect appeared shortly afterwards, but reported poor performance. The Minnesota project fared noticeably better.

"To improve performance, we were first able to integrate BP into our photonic circuits by laying flakes of the material on top of silicon waveguides - a first for BP, dramatically enhancing the interaction between BP and the optical waveguide mode," explained Minnesota's Nathan Youngblood. "Secondly, we were able to place source and drain contacts close to the waveguide in order to minimize the channel length and efficiently extract photoexcited carriers."

They also extracted the absolute optical power absorbed by the BP channel to a high degree of accuracy using on-chip interferometric techniques, and were able to tune the electrical properties of BP by adding a transparent graphene gate electrode on top of the BP photodetector.

The net result was a demonstration of high-speed operation, roughly six orders of magnitude faster than any BP photodetector published to date, along with a new benchmark for BP quantum efficiency.

A significant feat
"A key metric for comparing the performance of photodetectors is dividing the external responsivity by the dark current, to give the normalized photocurrent-to-dark-current ratio. In our BP detector this was 85 mW-1," noted Youngblood. "When we compare this figure to similar graphene photodetectors, our detector is four orders of magnitude better due to a significantly reduced dark current. And if we compare it to similarly designed germanium-on-waveguide photodetectors, the gold standard in on-chip photodetection, we get comparable results. This is a significant feat for a first-generation device."

One of the most difficult challenges in creating the waveguide-integrated detector was actually putting the BP on top of the waveguides, as Youngblood noted.

"BP comes in millimeter-sized crystals that must be exfoliated with tape to reduce them down to ultrathin flakes. Aligning these flakes to the waveguides presented some significant challenges, forcing us to develop our own tools to do the job."

The tunability of BP's direct bandgap - the energy separation between the material's valence and conduction bands - could prove especially fruitful in future. No other 2D material known at present has a bandgap that is ideally positioned in the infrared, according to the Minnesota team; bulk materials which do, such as germanium, are expensive and difficult to grow on silicon substrates.

"We used the fact that BP has a bandgap small enough to absorb infrared light to our advantage," said Youngblood. "It means we can apply a relatively large bias voltage and increase the collection efficiency of photoexcited carriers. When you do that in graphene, which does not have a bandgap, you conduct a significant amount of current through your device which overwhelms your photoexcited carriers. In other words, you cannot 'turn off' a graphene photodetector while biasing it - but you can with BP."

The tuning itself is achieved by varying the number the BP layers used. A single layer has a bandgap in the visible, at about 1.8 eV, while the bulk material's bandgap falls in the mid-infrared around 0.3 eV. The transition between the two is monotonic, with three layers yielding a bandgap of 0.8 eV - the energy of a typical telecom photon.

"This degree of tunability is unique to BP," Youngblood confirmed. "Other 2D materials can have a slight bandgap change from one layer to two or more, but the bandgap becomes indirect and does not change to the extent it does in BP."

Towards large-scale production
The project's future plans include further improvements to the frequency response of the devices, as they move towards an eventual hoped-for demonstration of a fully integrated transceiver using BP as the light source and photodetector.

However, some notable challenges remain to be met. Further improvements to the dark current can really only be made by using a PN junction, which requires selective chemical doping, or by thinning down the BP to a critical thickness, which reduces the absorption of the BP layer. Plus, of course, reliable large-scale production of ultrathin layers of BP will be needed.

"So far, neither selective chemical doping nor large scale growth of ultrathin layers have been demonstrated for BP. But it took several years for graphene to be reliably grown in large scales and controllably doped, so it is likely these difficulties will be addressed in the near future for BP as well," said Youngblood.

"The goal is to one day have a system on silicon technology that is able to generate and detect light, so as to send high speed data optically. BP seems to be a promising material that can complement the strong advantages of current silicon technology while addressing its weaknesses. Time will tell whether it will be able to competitively fill some commercial need."