The British Ministry of Defence is planning the development of a prototype high-power laser directed energy weapon. An event to brief potential commercial developers is scheduled for 15 April in Portsdown West, UK.

The meeting of potential suppliers for the development, called the Laser Directed Energy Weapon Capability Demonstrator, will be organized by the Defence Science and Technology Laboratory, which will be managing the estimated £100 million project.

A brief description of the likely project requirements reads, “In order to achieve its strategic aims within the constraints imposed in terms of budget and operating environment, the UK needs to invest in the emerging technologies either to exploit them or to establish their limitations.

“The potential of laser-based weapons systems has been identified as an opportunity and offers significant advantages in terms of running costs as well as providing a more appropriate response to the threats currently faced by UK armed forces.

“The aim of the Laser Directed Energy Weapon Capability Demonstrator is to enhance the UK’s understanding of the capability of a laser based weapon system. The project will consist of system studies and hardware trials, culminating in a number of practical demonstrations.

In order to be consded for this potentially lucrative contract, interested parties’ demonstrations will need to establish the following

The contracting authority said it initially anticipates that a single contract will be awarded, but it also acknowledges that “a broad range of capabilities is required to meet this research requirement, so it is not expected that a single supplier would be able to fulfil this requirement in its entirety.” 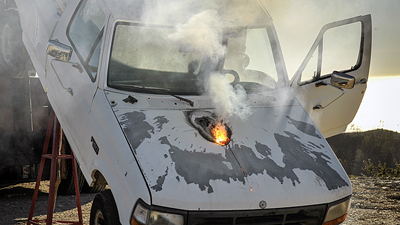 Known as ATHENA, for Advanced Test High Energy Asset, LM’s ground-based prototype system burned through the engine manifold in a matter of seconds from more than a mile away. The truck was mounted on a test platform with its engine and drive train running to simulate an operationally-relevant test scenario.

Keoki Jackson, chief technology officer, commented, “Fiber-optic lasers are revolutionizing directed energy systems. We are investing in every component of the system – from the optics and beam control to the laser itself – to drive size, weight and power efficiencies. This test represents the next step to providing lightweight and rugged laser weapon systems for military aircraft, helicopters, ships and trucks.”

ATHENA is based on the Area Defense Anti-Munitions (ADAM) laser weapon system developed by Lockheed Martin in Sunnyvale, California, which has been proven in demonstrations against small airborne and sea-based targets. It incorporates the 30-kilowatt Accelerated Laser Demonstration Initiative (ALADIN) fiber laser developed by the company in Bothell, Washington.