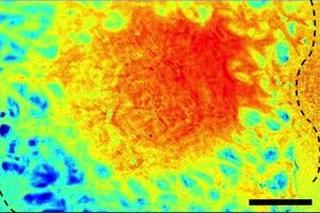 Under the skin: oxygen comsumption suffers

Oxygen is a critical resource in wound healing, and knowledge of how damaged tissues are taking up and consuming it can provide valuable assistance in the management of skin grafts, burns, and other skin conditions.

Poor oxygenation is also a direct factor in chronic ischemic wounds, such as diabetic foot ulcers, which affect large numbers of people and cause significant financial drain on healthcare resources.

Methods to monitor the oxygen levels in such ulcers have tended to be unsubtle, often involving the use of an invasive probe to yield polarographic information. A more effective and user-friendly method would be far preferable - especially if it could supply quantitative data about oxygenation, a valuable indicator of tissue health and the beginnings of any necrosis that may be setting in.

A team including researchers from the Wellman Center for Photomedicine and Harvard Medical School has developed an elegant solution: a paint-on bandage material, containing both an oxygen-sensing phosphor and a reference dye. Applied in liquid form, it dries into a thin-film dressing that can yield phosphorescent data about oxygenation with minimal disruption to the patient.

The technology was among those recognized recently at the SPIE Photonics West Translational Research Symposium as having potential for significant clinical impact.

"The optical principle behind the design is oxygen-dependent phosphorescence quenching, a well-established technique that has been used extensively in the study of oxygenation in biological systems," commented the Wellman Center's Zongxi Li. "Similar planar sensor formulations have been described in the past that can be applied to the surface of a subject; however, their efficiency is low. Our system achieves a higher sensitivity by using a brighter sensor molecule and a more selective detection scheme."

Living or dead
Development of the bandage required careful attention to both the chemical composition of the material and the optics performance of the sensor molecules within it. Indeed, the two aspects became complementary.

The eventual choice was a sensor molecule of metalloporphyrin design, conjugated with dendrimeric surface groups to increase its oxygen-sensing dynamic range. This proved to deliver a uniquely long phosphorescence lifetime, allowing the team to tackle one of the technique's most significant inherent challenges: the skin's auto-fluorescence, and its detrimental effect on the signals of interest.

Thanks to the long-lived phosphorescence, a delayed detection scheme could be employed in which the camera shutter opens only after the auto-fluorescence has decayed. This method avoids capturing the troubling fluorescence background altogether, catching instead only the phosphorescence data required.

Finding a suitable bandage formulation posed some different hurdles, and developing one that was both compatible with the sensor molecule and able to conform to the skin took some time. The search eventually led the team in an unexpected direction.

"The paint-on liquid bandage we ended up using was somewhat of a surprise, because it is based on an FDA-approved consumer product available in any local pharmacy," commented Li. "But this material happens to provide excellent chemical and mechanical properties. It is transparent and forms an airtight seal with the skin, which allows for oxygen to equilibrate between the bandage and tissue."

Beyond indicating the simple presence of oxygen, the phosphorescence intensity and lifetime can be used to yield quantitative information about the oxygen consumption in the sensor molecule's environment - an extremely significant metric, allowing the technique to potentially serve as an assay for living and dead cells.

Trials on the skin of pigs both ex vivo and in vivo have confirmed that the oxygen maps produced by the bandage can spot the early stages of tissue necrosis almost immediately after the creation of a burn, and monitor the further deviations from normal oxygen consumption as the decay progresses. The boundaries of the necrotic area are also revealed more reliably than by simple visual examination.

Li envisages that it could provide a non-invasive and objective way to tell if a tissue being used in an organ transplant is viable or not, or used to guide surgical excision of necrotic tissue during burn treatment or bowel surgery.

Translational promise
The bandage in its current form is limited to sensing oxygen on an exposed surface of a subject, making it most suitable for use on skin or during intra-operative applications. But as a non-toxic technique using inexpensive components and able to operate independently of common interference parameters, the clinical significance of the work could soon become apparent.

Preclinical testing has already shown the bandage is safe when used in animals, and the regulatory process for such a non-invasive technology should be relatively straightforward.

"At the moment we are working with physicians to identify the first clinical application for product launch and are in the process of initiating the in-human trials, as well as negotiating licensing options with startups and medical device companies," said Li.

"The next challenges involve the translation of the technology to either startups, small businesses, or large enterprises for product engineering, safety testing, FDA approval, and eventually distribution. Our goal is to establish a pathway that continues to sustain further innovation in this bandage technology, while supporting a collaborative scheme for technology development and eventual large-scale deployment. "