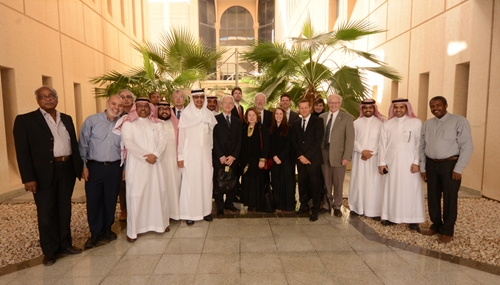 Inaugurated February 16 with talks from laser pioneers including Gérard Mourou, Paul Corkum, and Nobel laureate for physics Ted Hänsch, the ‘Attosecond Science Laboratory (ASL)’ represents the first such laboratory in the entire Arabic world, according to MPQ.

Fundamental chemistry insights
Researchers from the three institutions will use the new Saudi facility to investigate one of the fastest phenomena known in nature, the motion of electrons. That promises to open up fundamental new insights into the mechanisms of chemical reactions, with knock-on benefits likely in medicine and biology.

Ferenc Krausz, who already works at MPQ, holds a chair at LMU and is involved with Trumpf’s scientific laser venture, is quoted by MPQ as saying: “By creating the ASL, our collaboration can not only spawn new scientific findings – as is normal for every well-performing cooperation – but settles a new field of research like attosecond physics in a region where students have to travel thousands of miles to be able to access this technology.”

Krausz and his research group at the Vienna University of Technology (VUT) are credited with producing the first attosecond-scale pulse back in 2001, with a flash of laser light lasting just 650 attoseconds.

Before that they had spun off the ultrafast laser company Femtolasers, which has just been acquired by US-based Newport to become part of the firm’s Spectra-Physics laser division.

50 attosecond “target”
Since 2001, scientists have worked to further shorten pulse durations, with a University of Central Florida (UCF) research team setting a new world best of 67 attoseconds in September 2012. At the time, UCF researcher Zenghu Chang said that the target was to get below 50 attoseconds, which is thought to be the universal response time for molecular and atomic systems following the removal of an electron.

Krausz has won numerous prizes for the work to produce such short bursts of light, including the King Faisal Science Prize in 2013 – which he shared with fellow attosecond scientist Corkum, who is based at the University of Ottawa in Canada.

Researchers from the Laboratory for Attosecond Physics at MPQ and from LMU had previously teamed up with laser physicists at King Saud University, while the European Union is spending hundreds of millions of euros establishing three giant laser facilities in eastern Europe, known collectively as the Extreme Light Infrastructure (ELI) project.

One of those giant facilities, near the University of Szeged in Krausz’s native Hungary, is to focus on the attosecond pulse regime. Femtolasers is providing a source laser for one of the beamlines at another of the three ELI “pillars”, at Prague in the Czech Republic. It is set to produce femtosecond laser pulses with high energies, at an unprecedentedly high repetition rate.