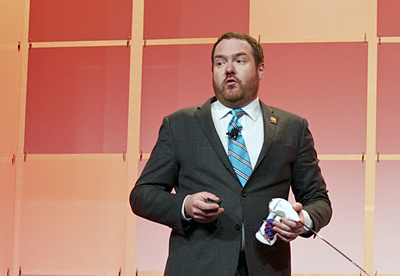 Blood-vessel-detecting technology for surgeons, a microphone that detects sound without moving parts, and a plasmonic film that replaces a lab-bench worth of equipment with a robust, portable detector were judged to be the top projects in this year’s SPIE Startup Challenge, held as part of Photonics West 2015.

Hosted by SPIE, the international society for optics and photonics (which owns optics.org), the pitch competition was held 11 February in San Francisco during SPIE Photonics West, following earlier knockout stages open to new entrants to global optics and photonics community.

After several hours of presentations and the subsequent judgment by a panel of industry sponsors, the Startup Challenge Winner was named as Jonathan Gunn, whose company Briteseed has developed SafeSnips – an optical tissue detecting technology that helps surgeons make better critical decisions when operating on patients.

"What we're proud of is that we have found a tangible clinical medical need," Gunn said. "Optics research has really brought us to the point where we can create a technology like this and have it used widespread in operating rooms nationally and internationally."

The competition was keen, Gunn said. "I saw five other really awesome teams present. I think that the judges saw that our technology should be feasible and could get built in the next year. That's really exciting for us." 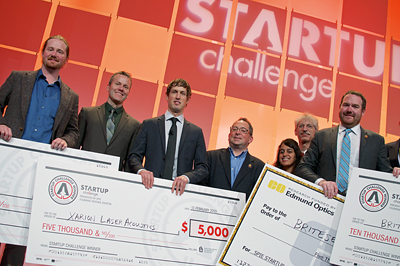 Taking second place, Balthasar Fischer of Xarion Laser Acoustics pitched his Membrane-free Optical Microphone. The device requires neither a membrane nor any other moving component to convert sound into electrical voltage, exploiting the fact that sound can change the speed of light.

In third place, Jeffrey Crosby of Picoyune pitched a chemical sensing platform whose patented plasmonic film is highly sensitive to mercury and can be coupled with existing gas monitors. The intended first customers are coal-fired power plants that, by law, need to carefully monitor their output of mercury.

Cash prizes for the winners, including $10,000 for first prize, $5,000 for second prize, and $2500 for third are funded by Jenoptik, the event’s founding partner. Additional support for the training program was from lead sponsor Hamamatsu, and supporting sponsors Trumpf, Open Photonics, Edmund Optics, Perkins Coie, and Knobbe Martens. Edmund Optics also will award the first-place winner $5,000 in products.

Along with the winners, the other presenters who made it through to the final stage were: 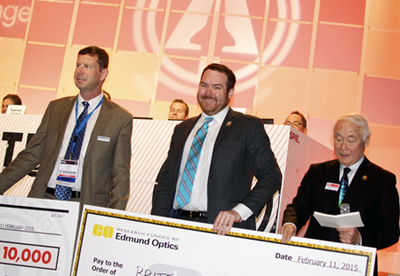