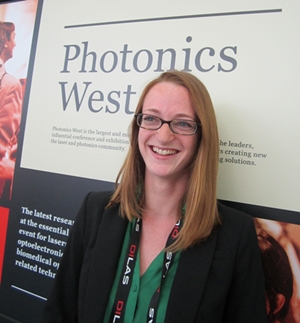 by Ford Burkhart
Better ways to steer a tiny probe searching for ovarian cancer have been achieved by a team from the University of Arizona (UA). With 3000 optical elements - compared to 1000 typically - their device is also highly sensitive in its ability to discriminate cancer from healthy tissue.

Last week, they attended Photonics West looking for industry partners to one day manufacture it. The device was presented at the Endoscopic Microscopy X conference, part of the biophotonics-focused BiOS symposium.

“We are getting ready to reach the market,” said Molly Keenan, a UA research associate in biomedical engineering and optics. The goal, she said, is a device that could operate in an obstetrics-gynecology clinic, perhaps with only local anesthesia, a device so portable “you can carry it to the clinic, plug it in and go to work.” Right now, the components fill up a small room on the UA campus.

The endoscope's stainless steel hypotube measures about a meter long and 700 microns across. Its internal space is about 600 microns wide, and holds multiple fibers to perform illumination, optical coherence tomography (OCT) and multispectral fluorescence imaging (MFI) at five wavelengths - 255, 370, 442, 543, and 638 nm.

Patent application filed
The Arizona researchers filed a provisional patent application at the start of February, and plans more research to improve the ease with which a physician could place the probe, with patient safety in mind.

The probe will improve on the “steerability” usually found in such small devices, Keenan said. Snapshots delivered at each wavelength will form a composite image with functional information about the tissue.

The team wants to improve on older techniques that require an incision as part of laparoscopic surgery, to investigate Fallopian tubes and ovaries. “That’s the idea, minimally invasive,” said Keenan.

In the future, they hope to allow a physician to view the images in real time during early screening for cancer. “There is now no way of looking into the Fallopian tubes with this level of resolution – and sensitivity,” Keenan said. One day, the platform might also be used for a biopsy.

The team also hopes to pack in as many as 6000 optical elements within the space constraints of the fiber, and widen the current 70-degree field of view. “Maybe we can improve on that,” Keenan said, noting that other, larger endoscopes can image at 180 degrees.