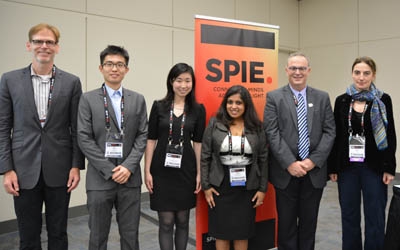 Researchers working on four new optical technologies won a collective $2000 at the Translational Research Symposium, part of the BiOS conference held at Photonics West last week, after being selected as the stand-out papers with the highest clinical potential.

The winning entries, all based in either the US or Israel, comprised a smart bandage for wound monitoring; a fiber-optic setup to reduce the risks of spinal surgery; a new laser-based method to deliver drugs into the back of the eye; and a lens-free microscope for digital pathology.

Co-chairs Bruce Tromberg from UC Irvine and Gabriela Apiou from the Wellman Center for Photomedicine at Massachusetts General Hospital said that the winners were selected from nearly 270 submissions - for their focus on key clinical issues like addressing currently unmet medical needs and showing definitive outcomes.

Introducing the winners, Apiou said that although the worlds of academia and industry were very different, it was critical for them to listen to each other. She added that academia was often ill-equipped to push its ideas out to industry, saying: “We want to ensure that young scientists can design and perform clinically relevant studies.”

Smart bandage for diabetic ulcers
The smart bandage developed by postgraduate student Zongxi Li and her colleagues, one of the four winners, looks to have plenty of clinical potential. Li, who is also at the Wellman Center for Photomedicine, described how the transparent bandage uses phosphorescence stimulated by blue light to measure oxygen levels in the tissue of wounds such as diabetic foot ulcers (DFUs). At the moment an invasive polarographic method is used, but that requires a painful needle insertion.

DFUs are a widespread problem, with an estimated 6 million people in the US suffering from the condition, at an estimated annual cost of $25 billion. Many of those end up with amputations because of the lack of oxygenated blood reaching their feet.

Li said that the bandage, tested on rats, could effectively “light up oxygen” with a simple color change for easy wound monitoring, and also be used to predict how likely DFUs were to appear in diabetics.

Fiber-optic spinal probe
Another postgraduate student winner, Angela Kogler from Stony Brook University in the US, is working on a completely new way to monitor spinal cord ischemia. It has the potential to reduce the incidence of spinal injuries caused when nearby tumors are removed surgically.

The portable fiber-optic probe, developed in conjunction with physicist Arjun Yodh at the University of Pennsylvania and a team with strong clinical experience, offers a new way to measure blood flow and oxygenation down the spine during surgery.

Those are currently monitored by sending electrical impulses via the brain, something that can only be done under anesthetic because of the pain it causes, and which has other drawbacks like not being able to distinguish between ischemia caused by injury and that from surgical clamps reducing blood flow.

The technology, which uses differential spectroscopy techniques to measure deoxyhemoglobin levels, has been tested on sheep, showing accurate, sensitive results alongside a fast response. Clinical feedback suggests potential benefits for surgical planning, and a new start-up company called NFOSys is looking to develop it further.